Happy last day of the year everyone!

I cannot believe how fast 2016 flew by! It’s honestly scary. Everyone keeps saying how bad 2016 was, but why don’t we look at the positive?! Thomas and I got engaged, panda bears were taken off the endagered species list, and dunkaroo’s from my childhood are making a comeback!
I’m slightly joking about that last part, but those suckers were so good. I can’t believe they were outlawed in the U.S! People are actually smuggling them over from Canada lol

With 2016 behind us, in 2017 I resolve to..
1) Not eat a whole bowl of guac and chips in one sitting, exercise self control, and just exercise in general. Someone trying to get a wedding bod cannot devour that many avocado’s in one sitting! But gawd it’s goooddd. Thomas and I have signed up with this thing called Classpass where you can go to different studios around the city like spinning, kickboxing, HIIT training, or whatever your heart desires. So my resolution is to do that at least three times a week and run at least twice! Shoot high ya know.
2) Be a tidier person. No longer will there be a pile of clothes mounting on the dresser from the week. Why is it that when I get home from work I think it’s absolute torture to hang something up in the closet? It’s a mystery to Thomas, but it ends now!
3) Learn Norwegian. Well at least a little more than I currently know. Last time I was in Norway and we were staying at Mormor’s (grandma’s) house, Thomas left the room and he said Mormor was talking to me about the weather and I was responding by saying how delicious the food was! Hilarious. Not anymore my friends!! Next time I see her I’ll practically be Norwegian 😉
4) Be more dedicated to blogging. No more nights and weekends of binge watching Grey’s, Friends, or whatever flavor of the week it is. My goal is at least two posts a week, preferably three. Hold me to it folks.
5) Be a great Fiancée and wedding planner. I vow to be the best Fiancée, not be a procrastinator or a bridezilla. The wedding is not until March 2018, so you would think that would plenty of time to plan.
6) And last but not least, I resolve to make more great, simple, healthy meals to support resolution numero uno above. This seared steak with these two salads (sun dried tomato and Greek) go so perfect together. Since it’s frigid outside, you can sear these on your stove and make a marg and pretend it’s summer! I’ll begrudgingly forgo the guac since I’m keeping all of my resolutions. 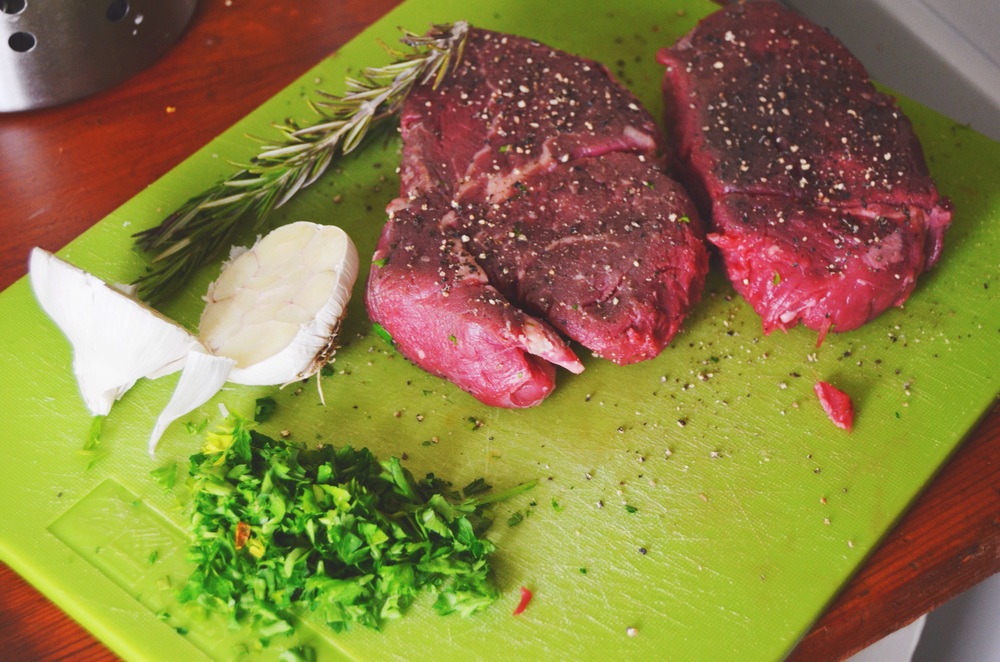 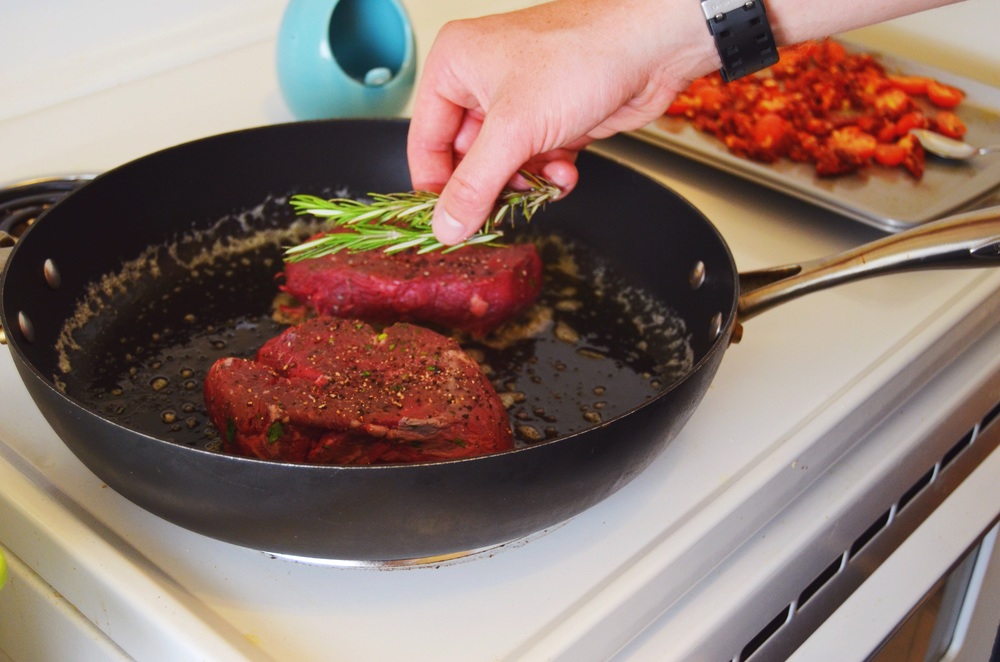 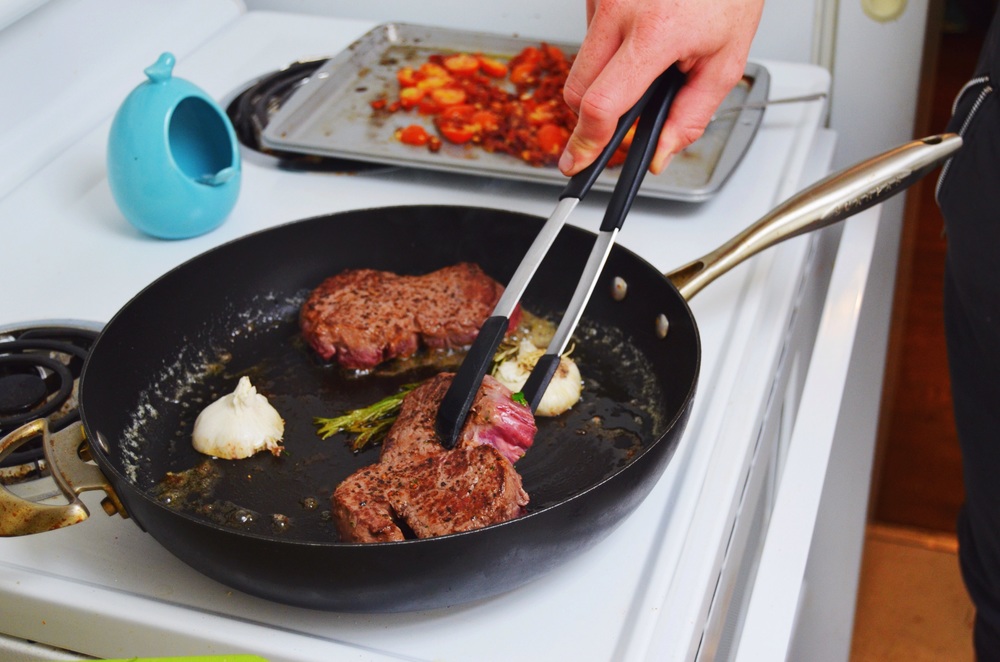 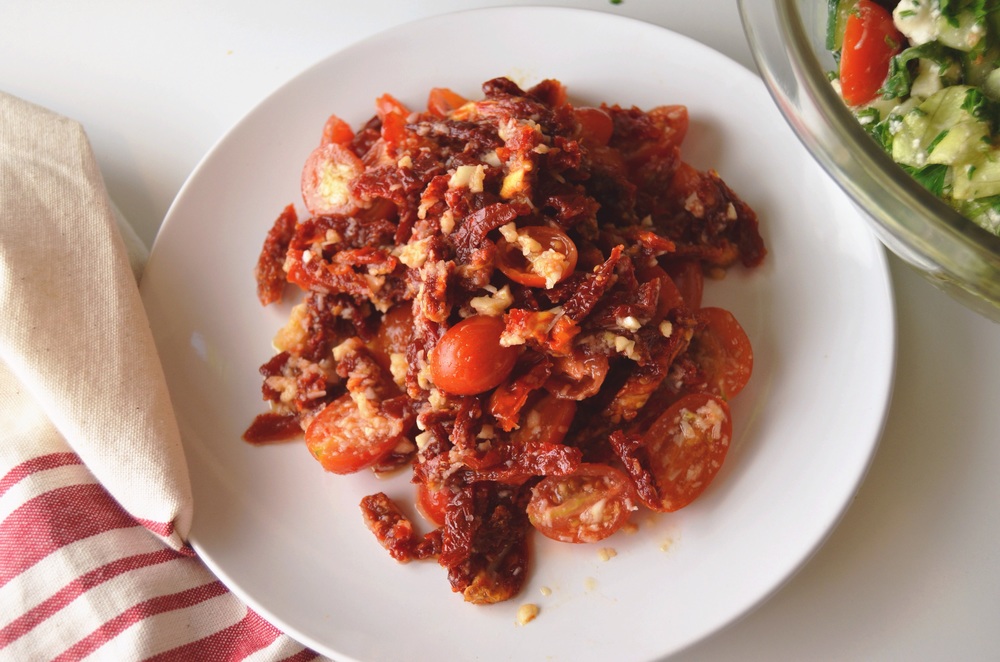 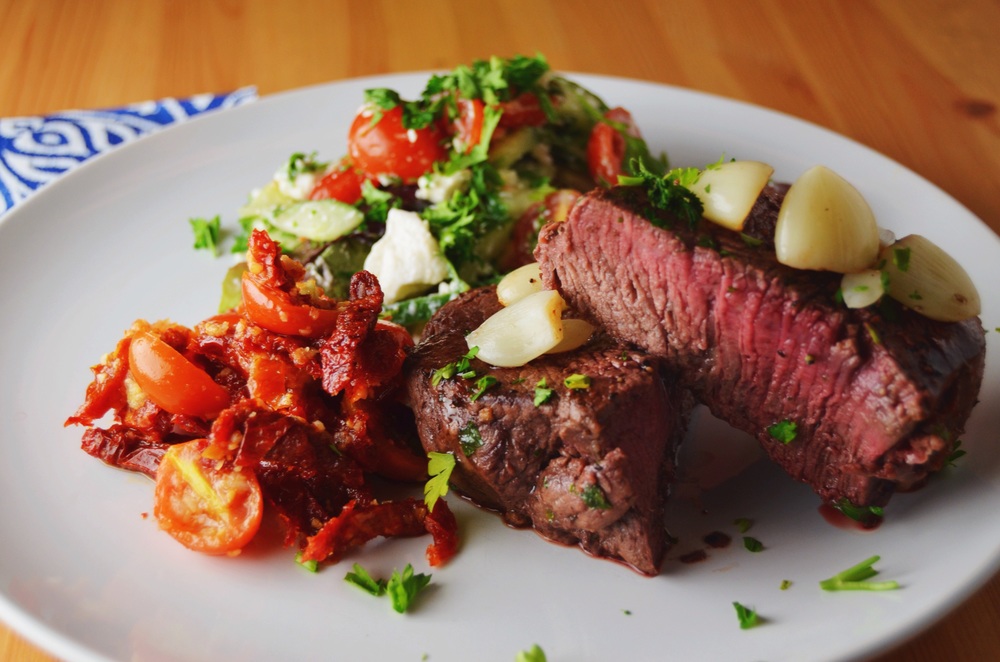 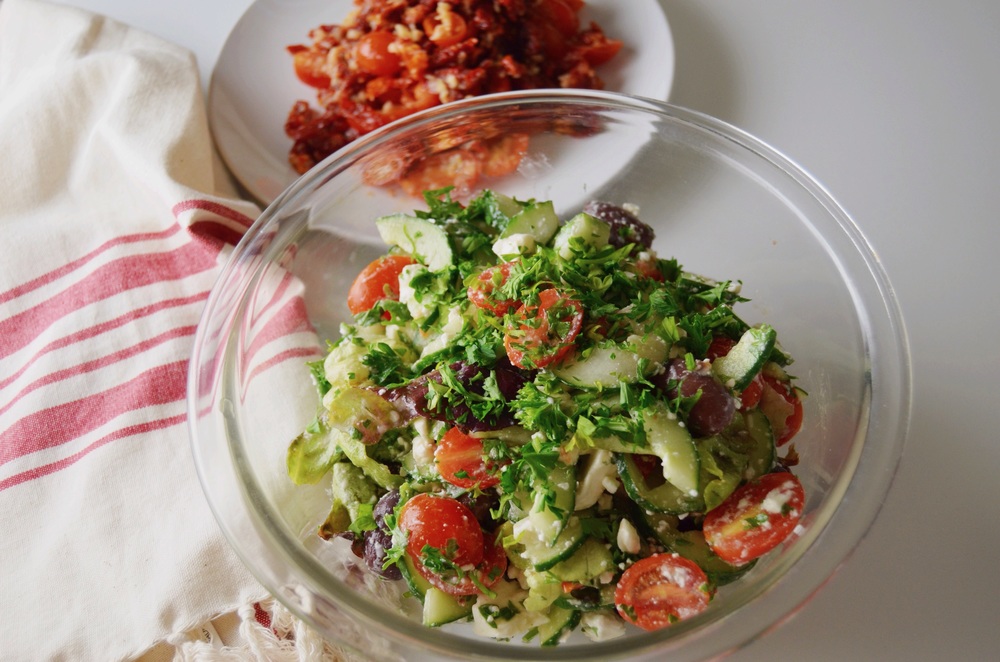 What to do
1) In a large skillet, heat butter or olive oil over high heat until very hot. Season steak with salt and pepper on both sides before placing in the skillet. Place halved garlic in the skillet along with a couple spring of rosemary. Sear steak on all sides until brown and remove from heat when it reaches and internal temperature of 155 degrees.
2) for the salads, combine all ingredients! Easy peasy. In the Greek salad, I like to add a little of the feta water to give it some saltiness.