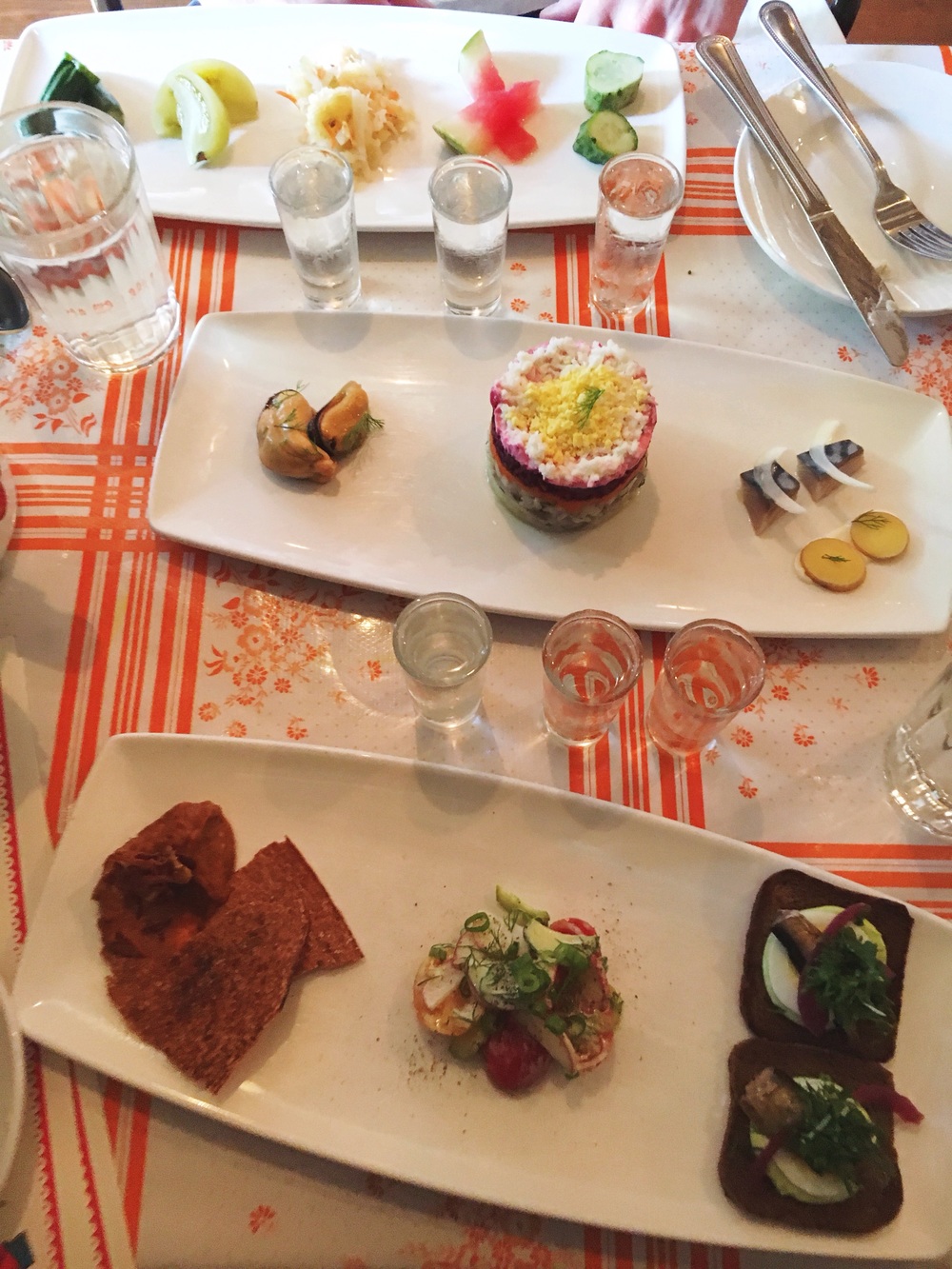 When you walk into Kachka located off of SE Grand Ave in Portland, you feel like you’re walking into your babushka’s house. Complete with orange patterned table clothes, mix-matched utensils, Soviet propaganda posters scattering the walls and Khrushchev-era  knicknacks. To add even more character there is funky Russian pop music pumping out of the speakers. The second we walked in I knew it would be one of the coolest dining experiences we’ve had so far living in Portand. 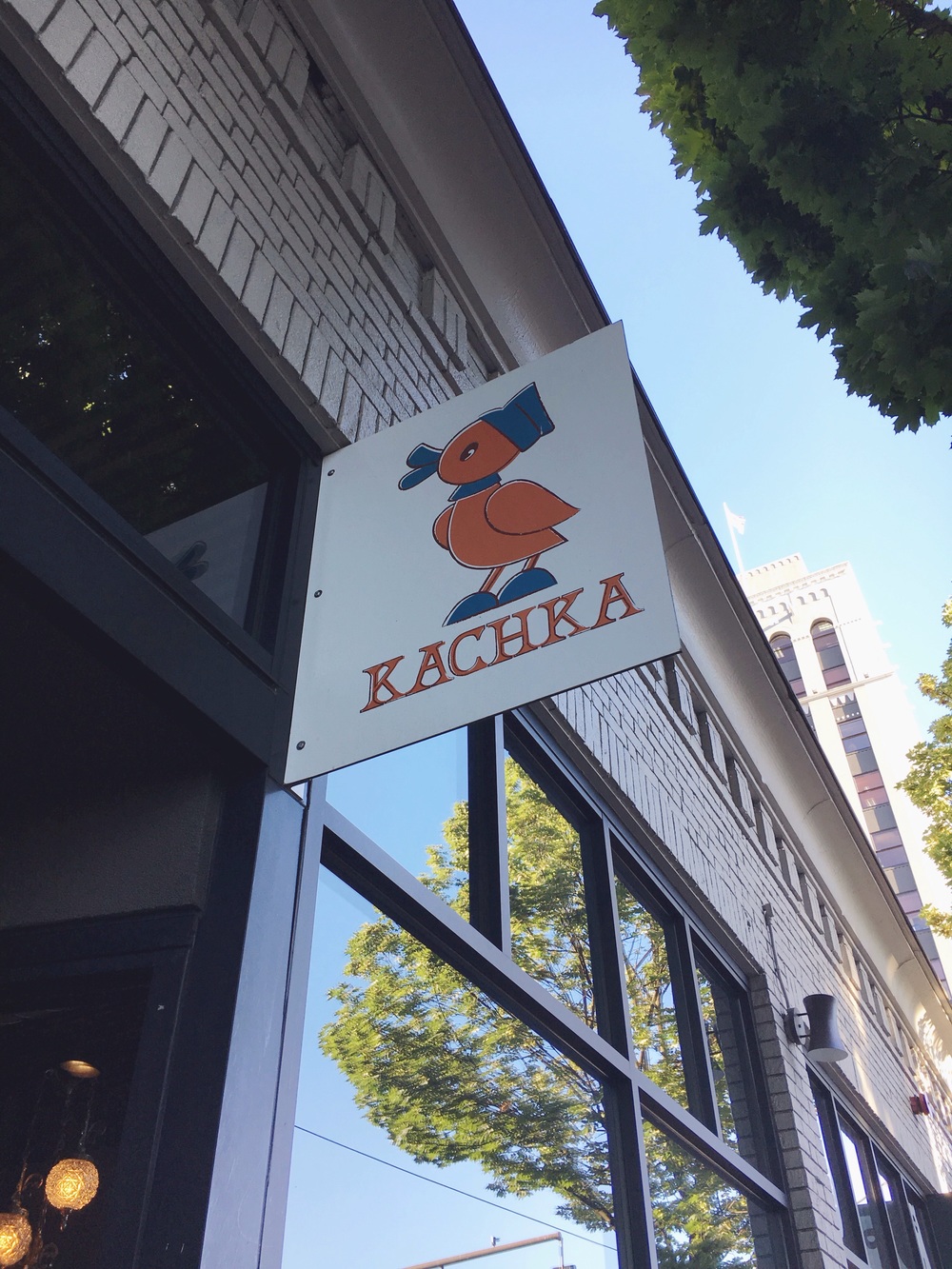 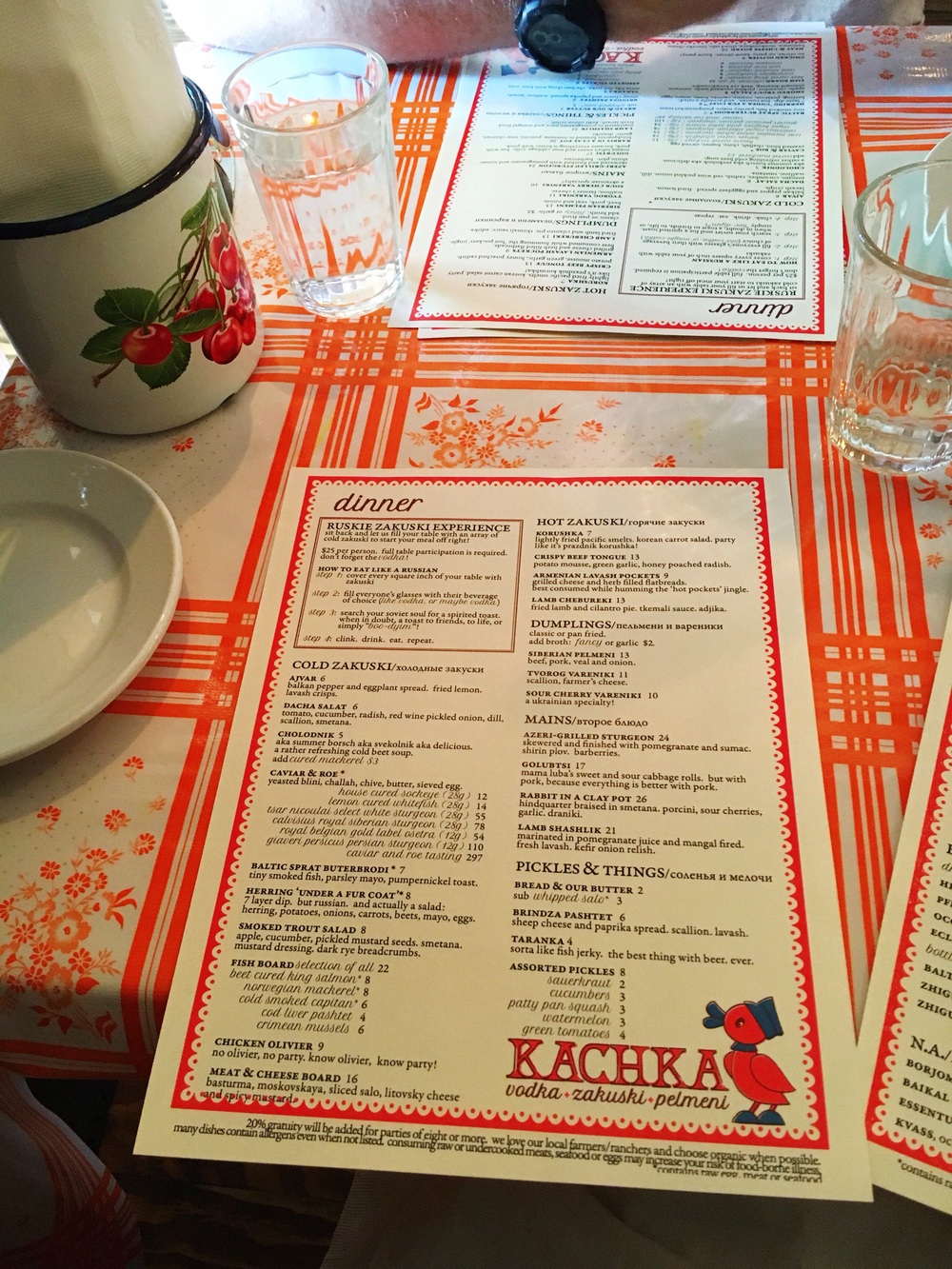 Kachka has been making headlines in the Portland food scene for several years now. Husband-and-wife Isreal and Bonnie Morales haven taken advantage of Bonnie’s upbringing as a first generation Belarusian immigrant and made it into one of the most unique  restaurants in town. I did a little research, and according to OregonLive, Russian is the 3rd most spoken language in Oregon! I had no idea. Even though it is one of the largest immigrant groups in Portland there was very little  soviet cuisine around until Kachka.

Of course we had to drink vodka (even though it’s my least favorite liquor EVER). I figured I’ve probably been drinking the bad, cheap stuff and now all of sudden I would miraculously love it. We ordered the classic “Mother Russia” vodka flight and the “Grain, Grape, Rice” to really see the difference in Russian/Polish vodka to vodka produced in other parts of the world. The flights come with 3 perfectly poured 1g shots inspired by the Russian saying “God loves a trinity”. To go with our vodka we wanted to try caviar! I didn’t know that sturgeon is the only roe to be considered “caviar” and the cheapest sturgeon on the menu was $55, so we opted out for the house cured steelhead instead.

I’m kind of a freak when it comes to movies, so i’m not sure if you’ll know this, but do you remember the scene in The Curious Case of Benjamin Button when Brad Pitt and Tilda Swinton drink the vodka and eat caviar and they act likes it’s heaven on earth? Well, that’s how I pictured eating our caviar and drinking our vodka would be. I was sadly mistaken. Eating roe = salty bliss, sipping vodka = pure torture. The roe was absolutely delicious and served with little blini, challah, chive, butter,  and sieve egg. Thomas and I tried to be sophisticated and sip on the vodka but it literally gave us the willies! We got tickled because every time one of us would take a sip we would make a face! So we ended up just downing all of the shots to get it over with. I don’t see how anyone could just casually sip on vodka! Blehh. Next time we’ll go with one of their amazing vodka cocktails instead like a Moscow Mule.

We continued our meal with the $25-per-person “Ruskie Zakuski Experience”. They filled our table with cold snacks like tomato and cucumber salad, smoked trout salad, an array of picked vegetables, and most importantly “herring under a fur coat”. This masterpiece is layers of herring, potatoes, onions, carrots, beets, mayo, eggs. It was perfection and (so cute to take pictures of!)

After the cold snacks we wanted something warm and hearty, so we shared the siberian pelmeni dumplings which was a harmonious mix of beef, pork, veal and onion. And to top it all off and make us so full we had to waddle home, we finished our meal with the “rabbit in a clay pot” which was braised rabbit in smetana. porcini, sour cherries, garlic and draniki potato pancakes to soak up the gravy. OMG.

The whole experience and meal was unique, flavorful, adventurous, and most definitely memorable. We walked home reeling from one of the most awesome experiences we’ve had as well as spinning from the vodka 🙂

Looking forward to next time!! 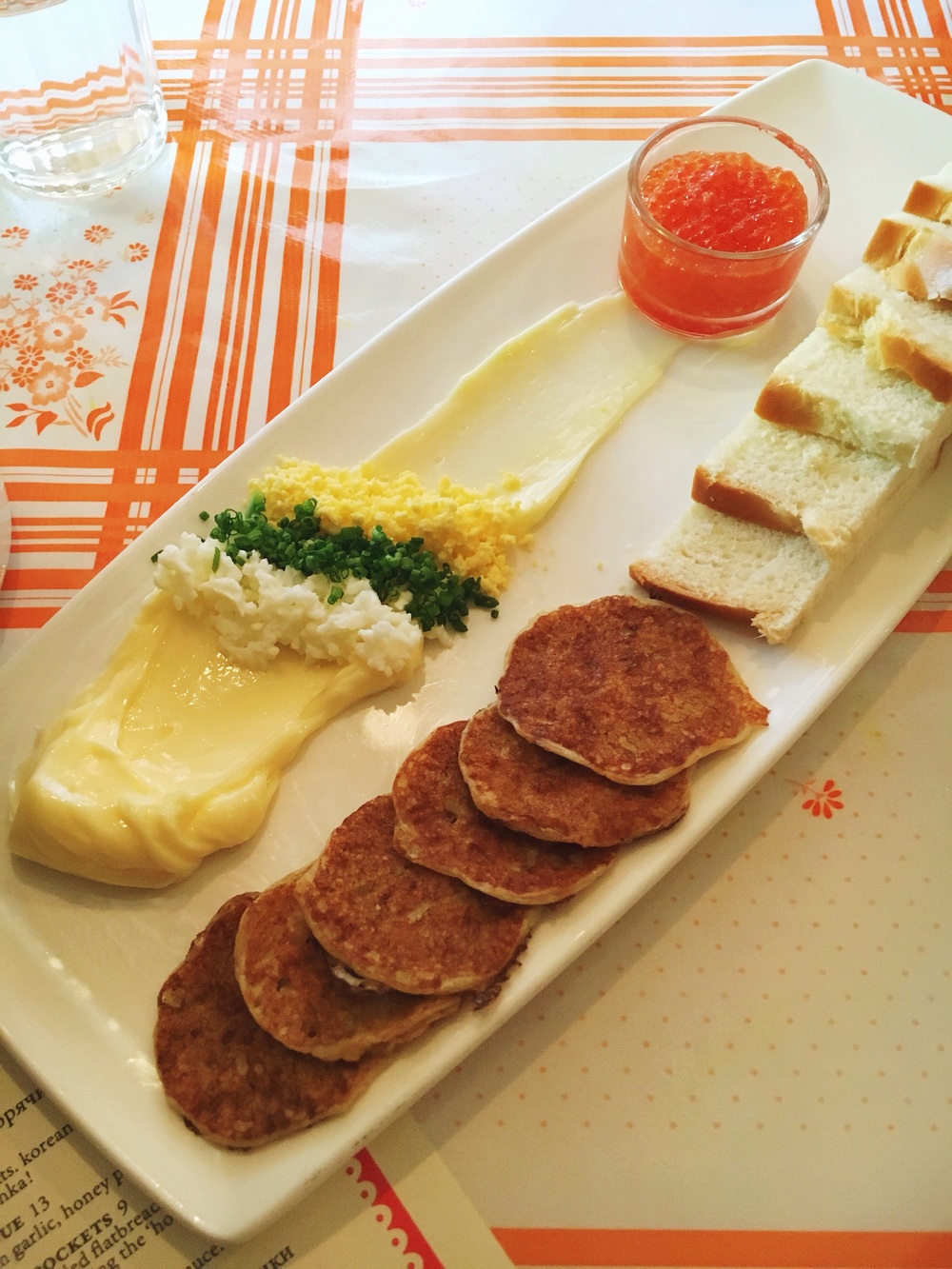 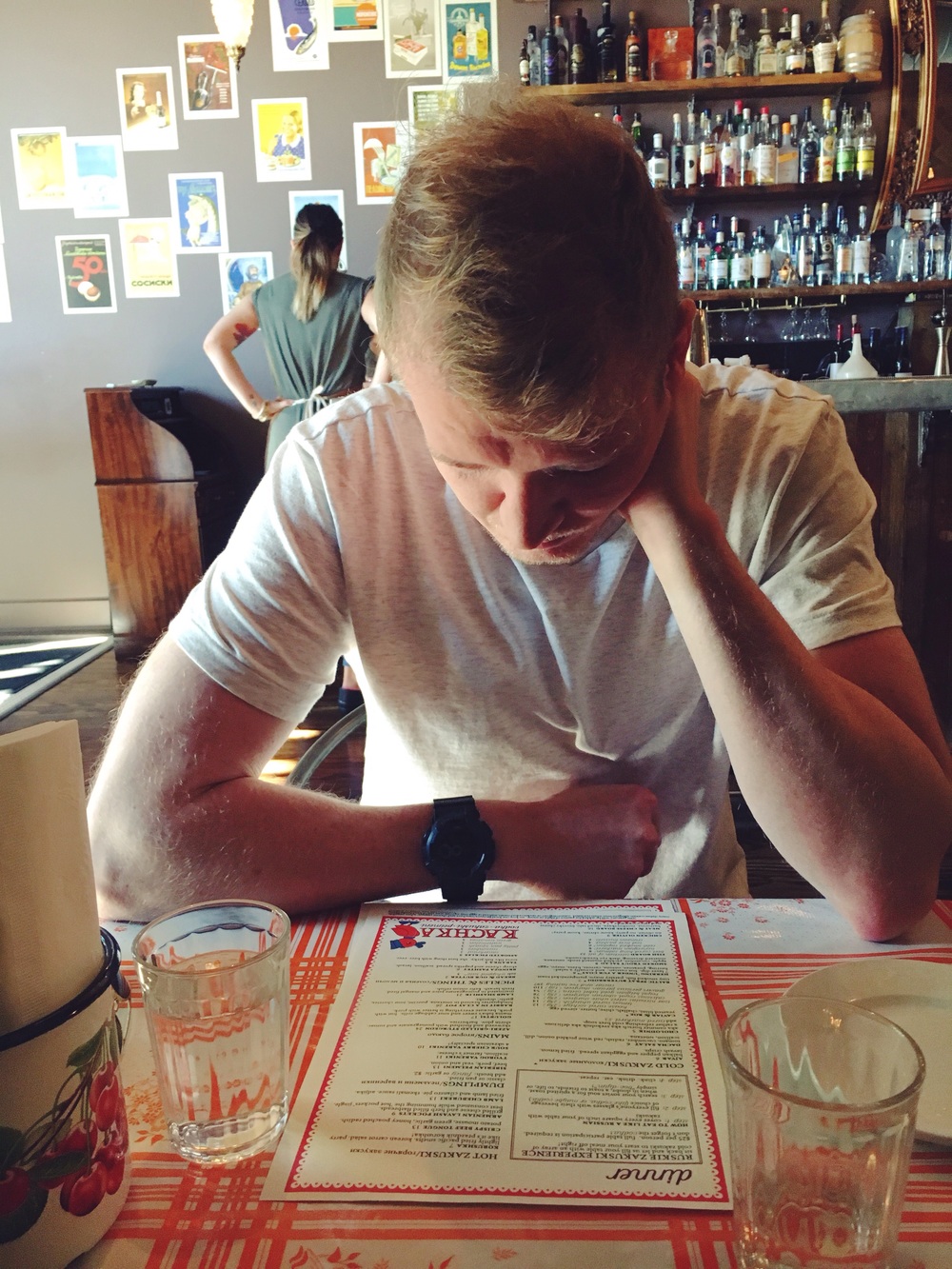 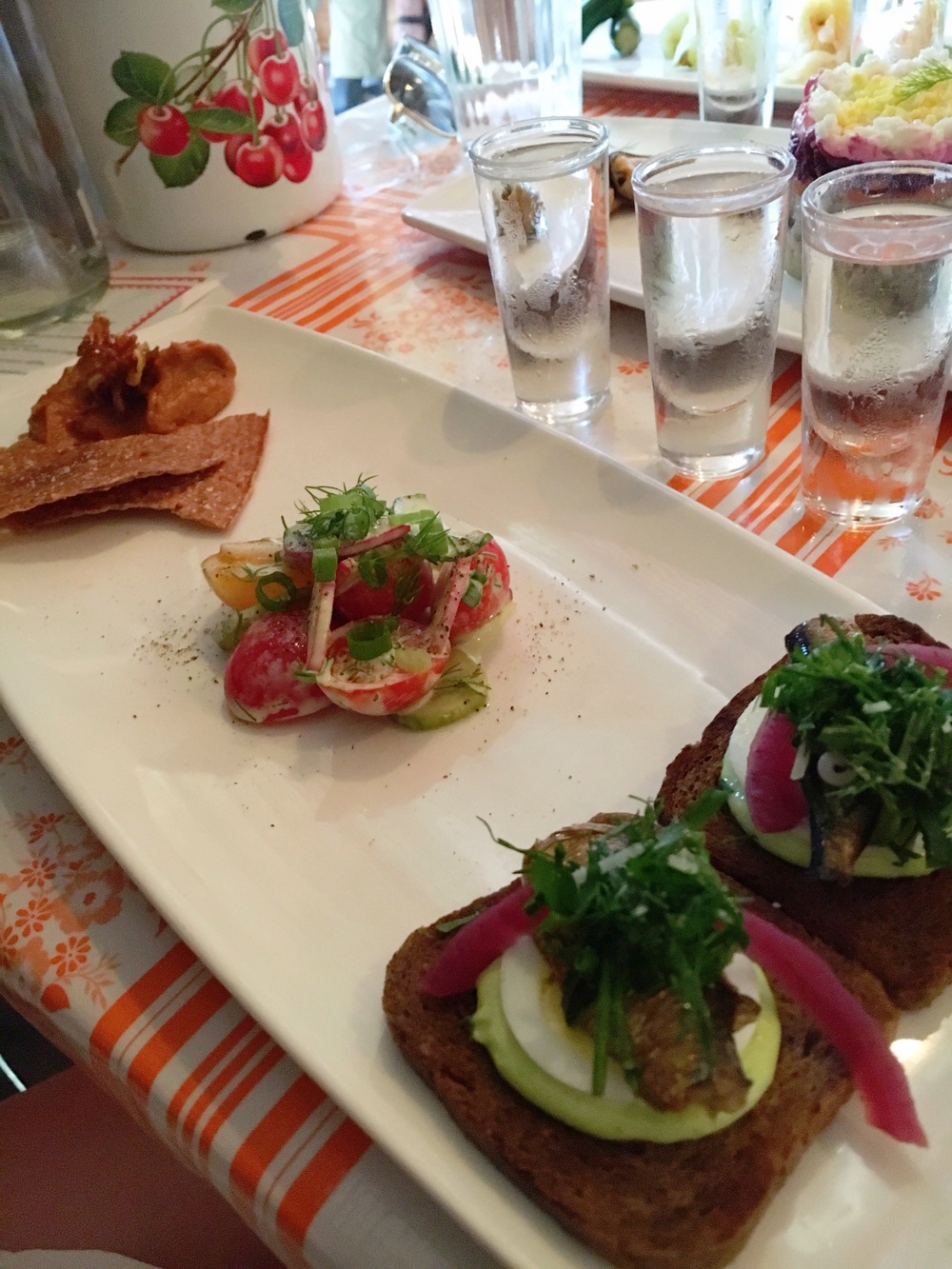 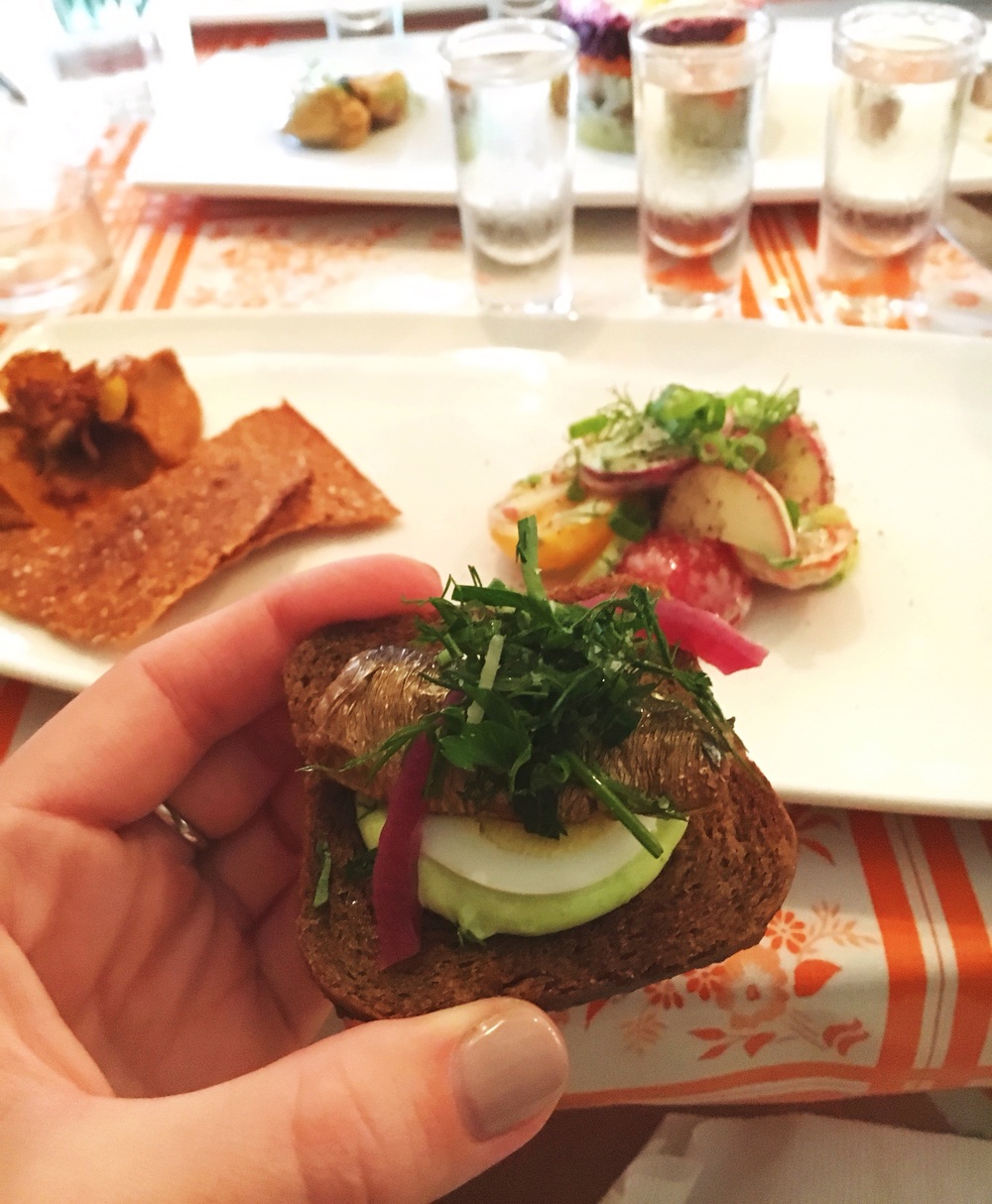 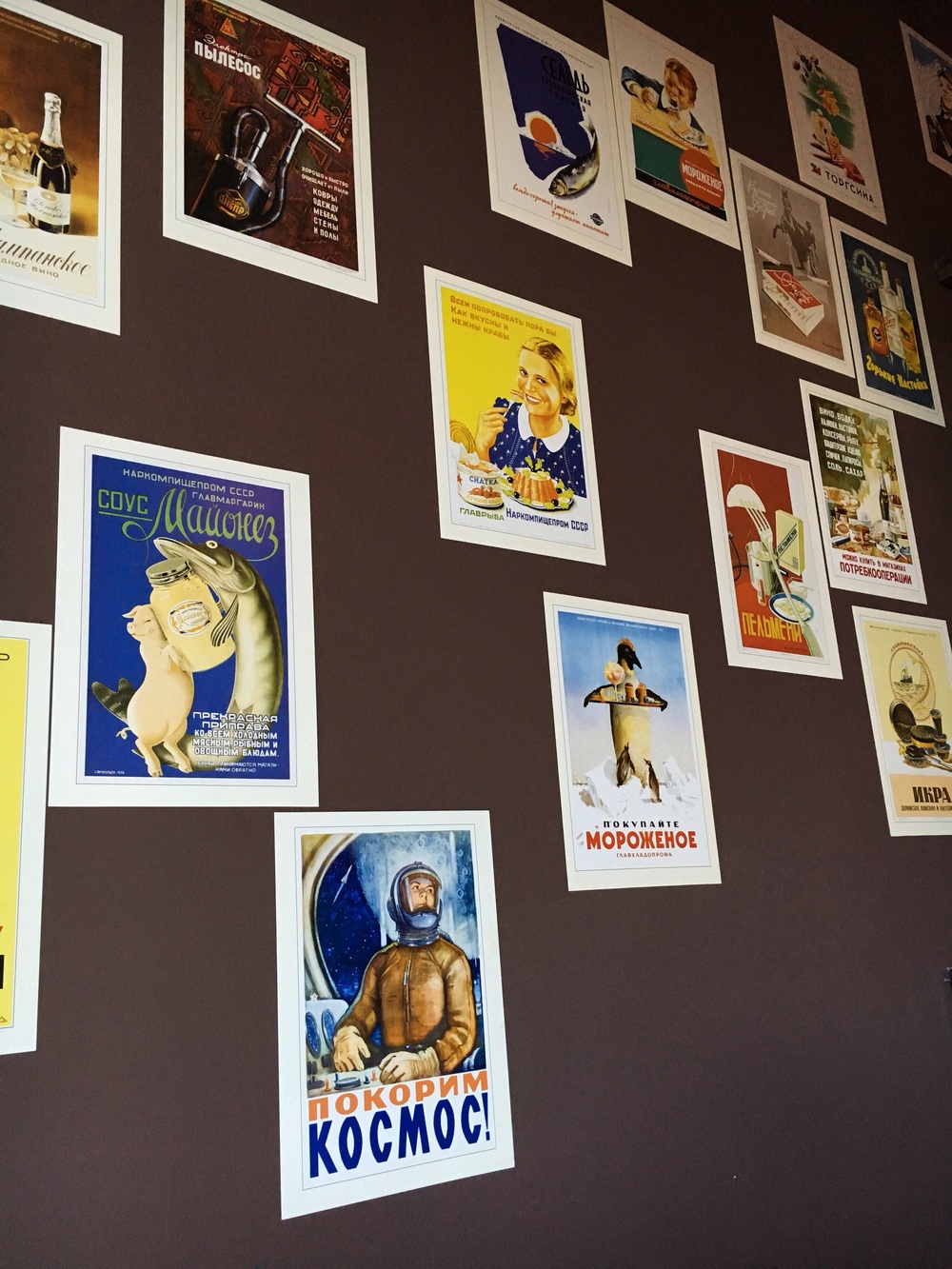 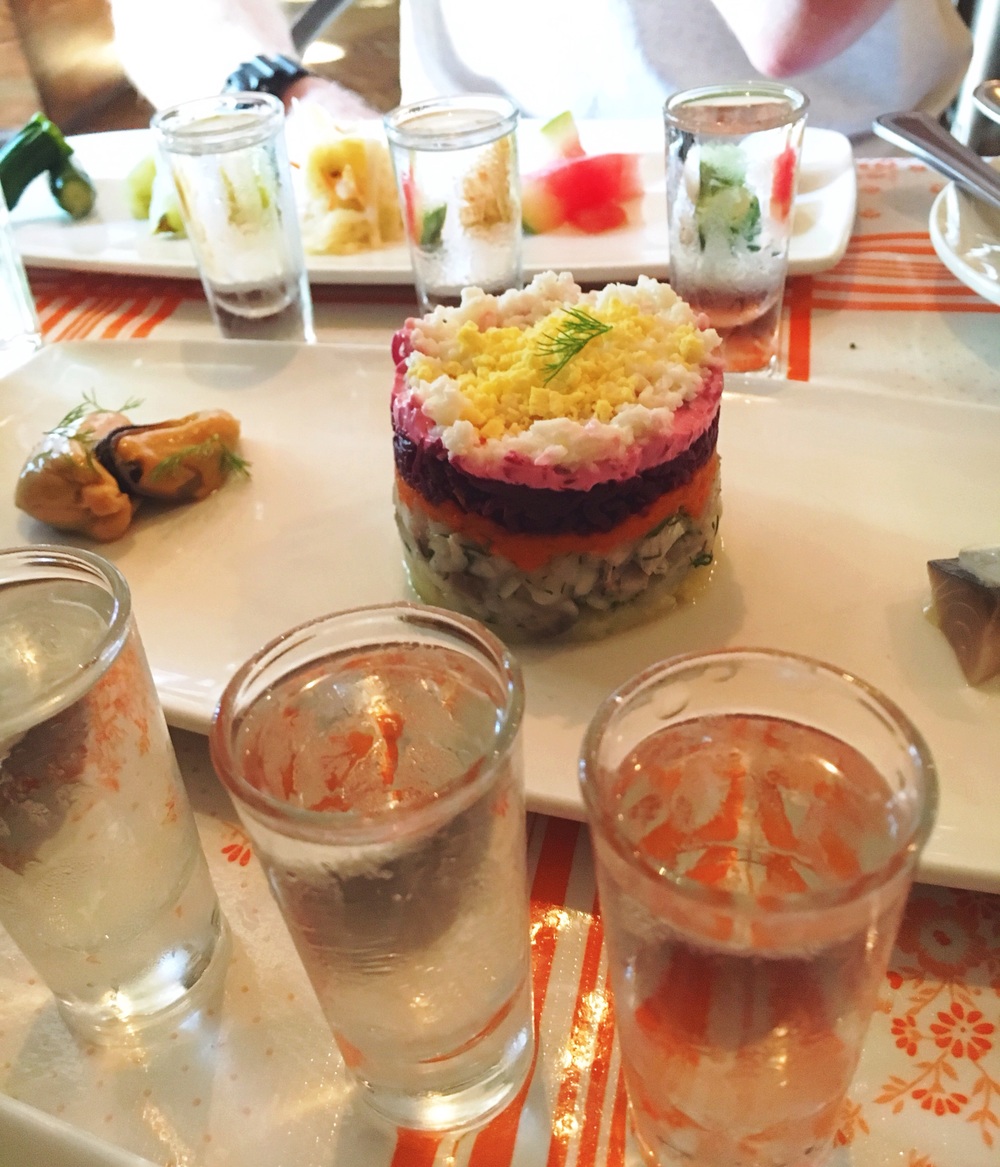 Herring “under a fur coat” 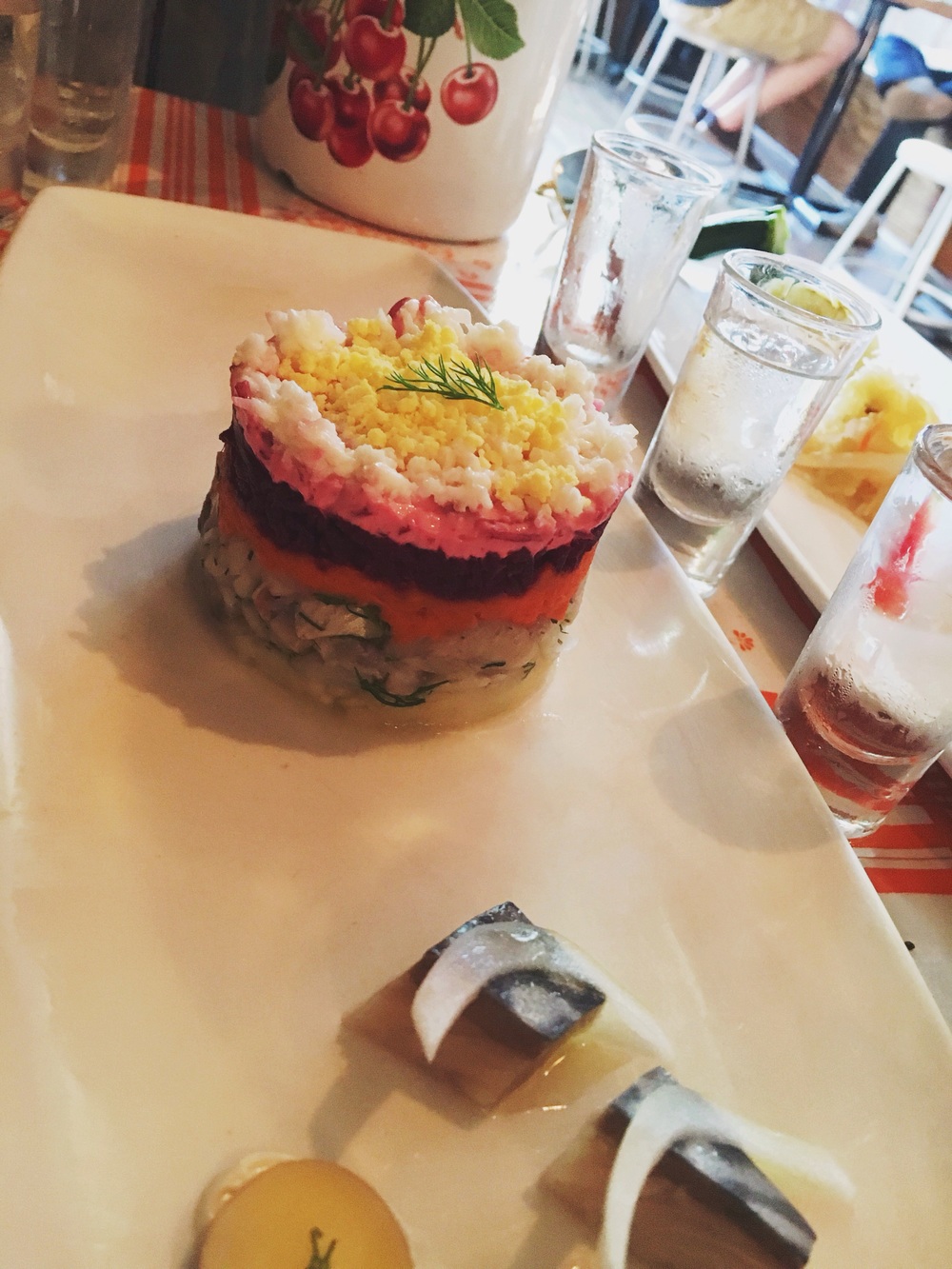 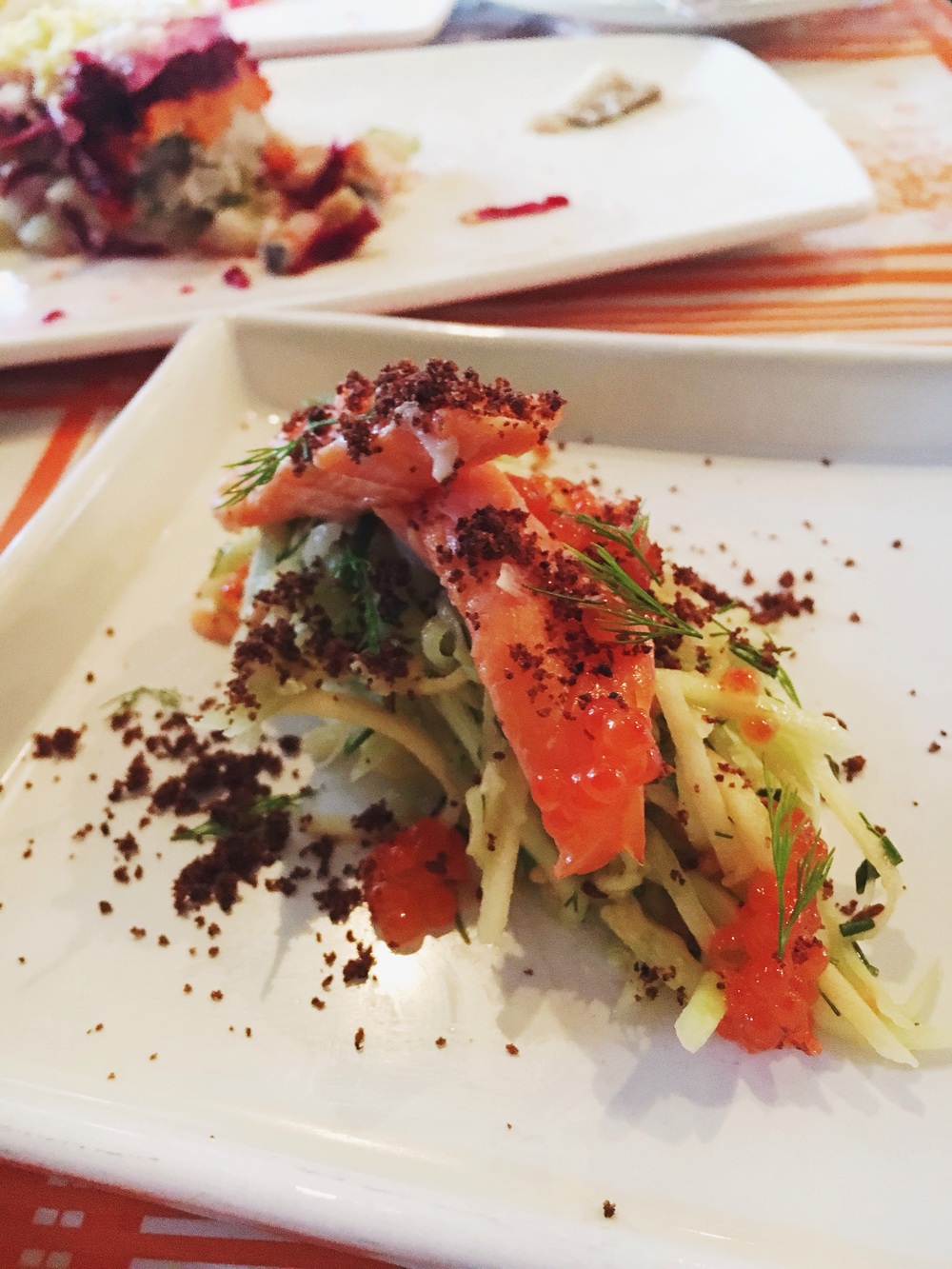 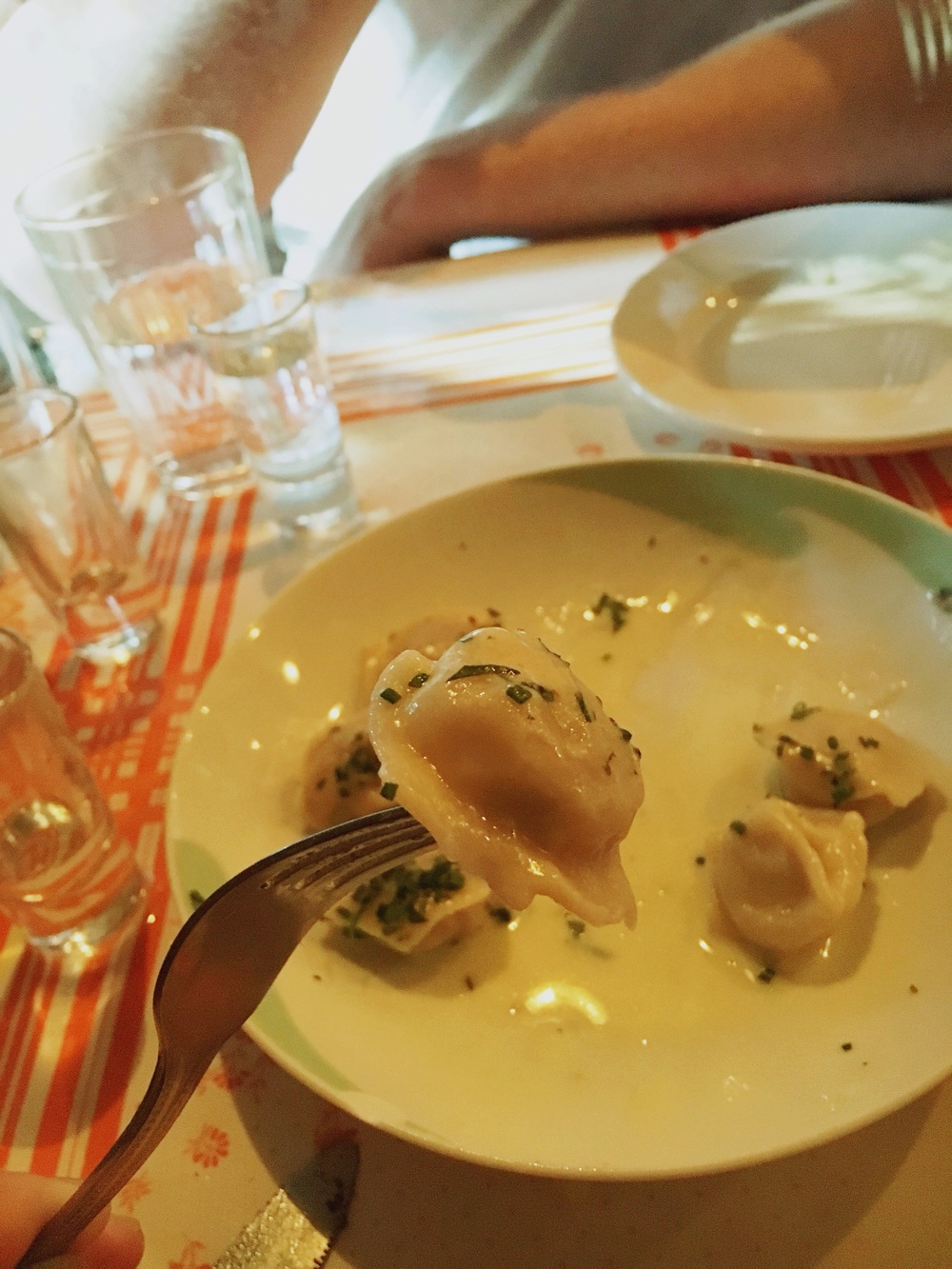 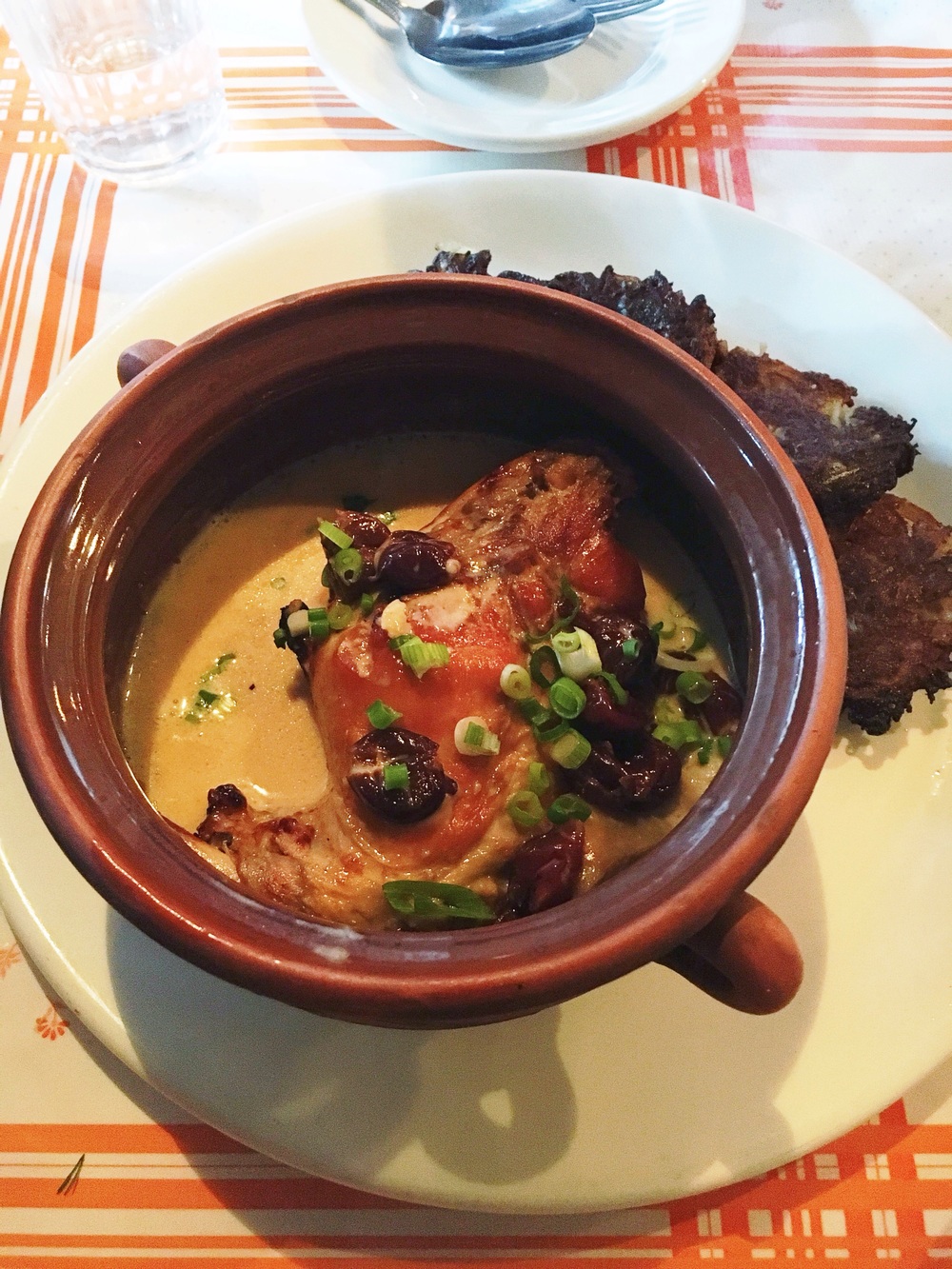