It’s officially 2017. I can’t believe it’s been 17 years since my 8 year-old-self was ringing in the millennium thinking I was so cool because I would dress in full jean outfits like my idols, Britney & Justin, and listened to Genie in a Bottle on repeat. Ahh those were the days.. you think I could still pull off a full jean dress? I think I could 😉

I hope everyone had a wonderful holiday season, ate great food with even greater company, and had somewhat of manageable hangover after NYE. Never before have I hung black sheets over every window in order to watch movies in our cave-like apartment, but that’s what we did to “observe” the New Year and it was much needed.

Now we’re back in our daily routine – back to work, attempting to exercise more, and not having a primarily cheese, wine, and cookie diet. I’ve spent my nights trying to write more and flipping through a number of amazing cookbooks that I got for Christmas. When Thomas and I go to Powell’s Bookstore, we immediately head straight to the cookbook section. I can spend hours flipping through and looking at the delicious and decadent pictures and reading cooking wizardry, but I usually always end up walking away and never buying anything. So for Christmas, Thomas bought me three amazing books and I’m obsessed. Plenty More, Bountiful, and A Kitchen in France. And to make it even better, he put little “coupons” throughout the books! So when I go to make a recipe I get an extra surprise as well! Babe, can I get a hint which book and page you put the “back rub” coupon? 🙂

The first dish I made was out of A Kitchen in France, which was Blanquette de Veau. To cook something en blanquette means that the meat is not browned in the cooking process which I didn’t know! The recipe called for a veal (veau) shoulder, so I called every butcher in our area but there wasn’t veal anywhere to be found. So I substituted a pork shoulder which was delicious and probably much cheaper.

This calls for A LOT of butter…but it also has a butt load of veggies and I used quinoa instead of rice, so that has to count for something right?! I mean come on, you can’t eat salad and celery sticks forever. It’s frigid in Portland, like most of the country right now, so this is a perfect meal to warm your belly. Right at the end of the cooking process, you combine crème fraîche, egg yolks, lemon juice, a few ladles of broth and add it back in the stew and holyyyy cow. It’s the creamiest dreamiest stew you’ll taste all year. If you’re feeling crazy, go ahead and dip a big slice of french bread in it. Screw the diet! 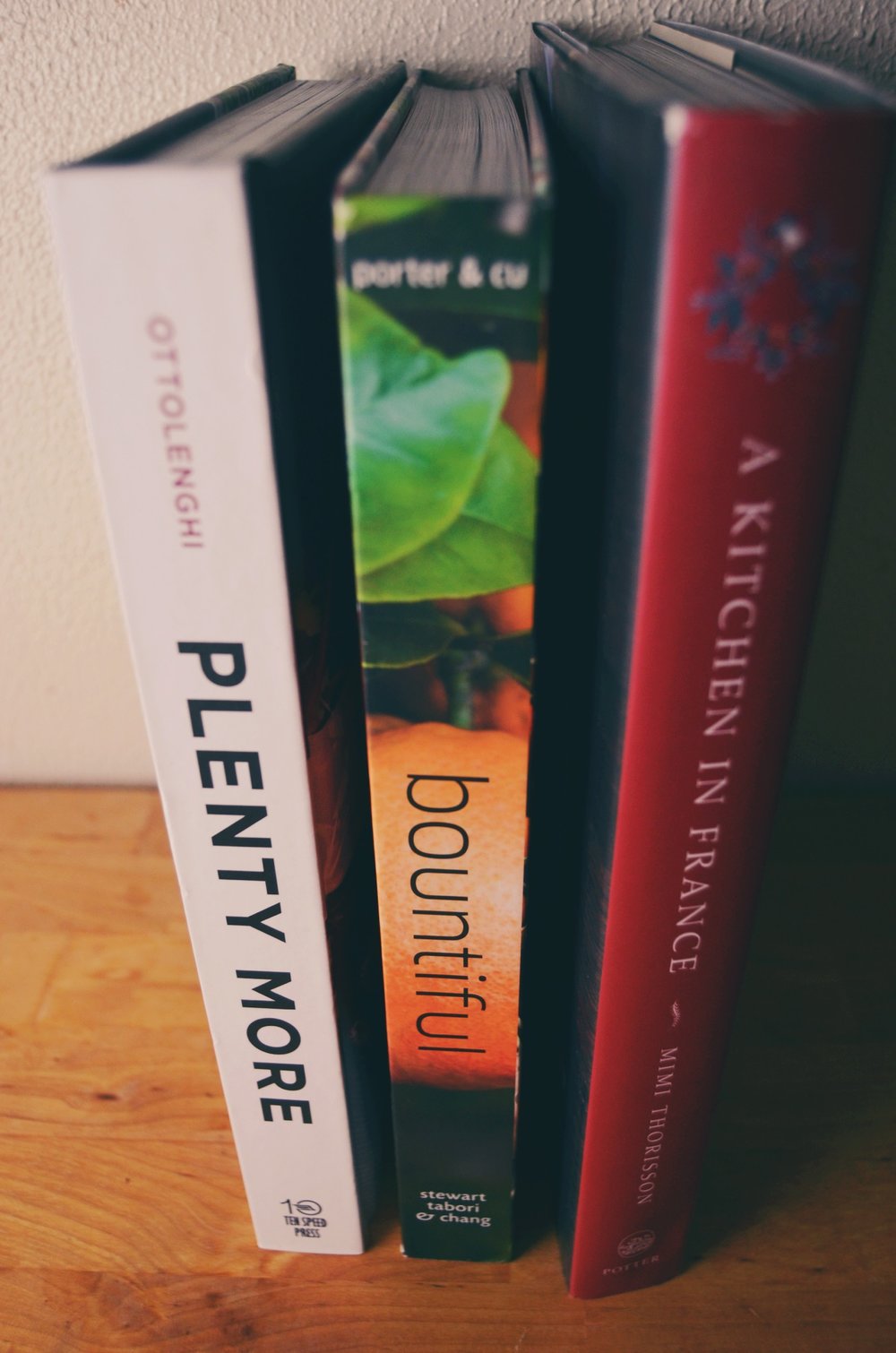 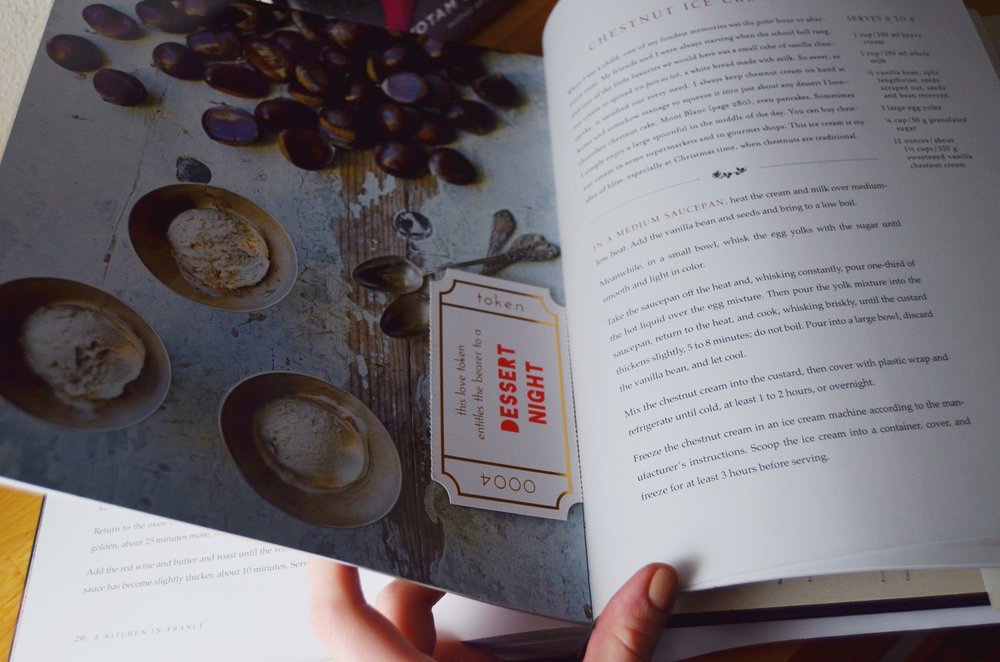 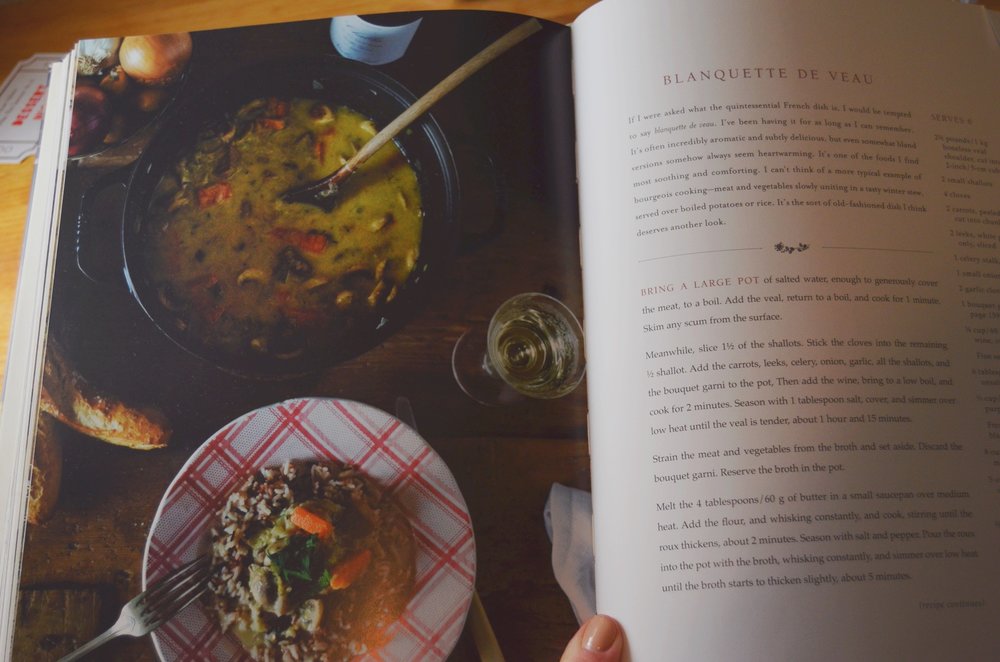 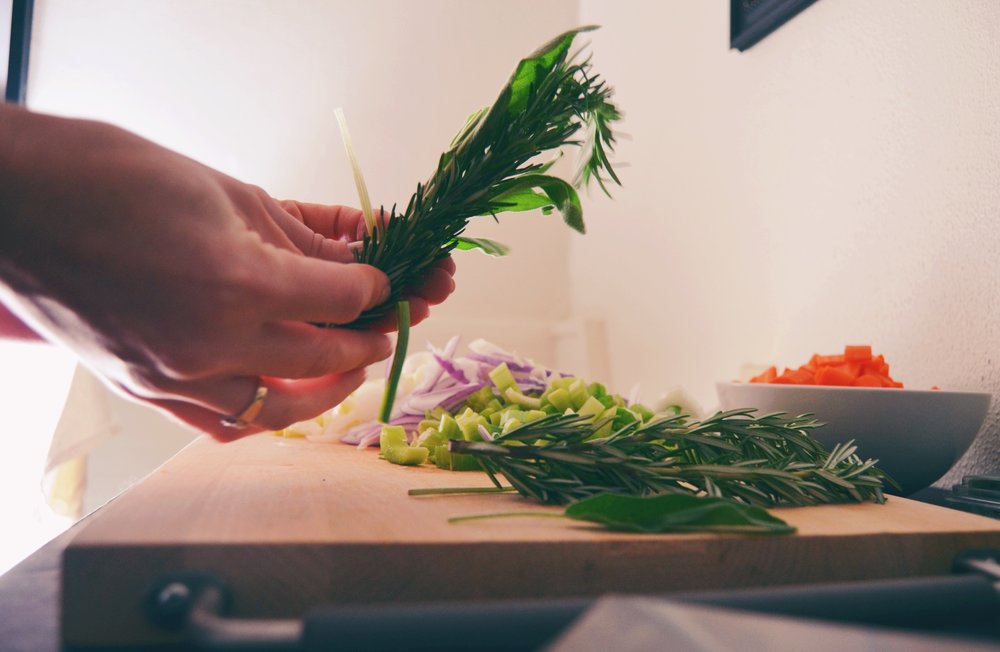 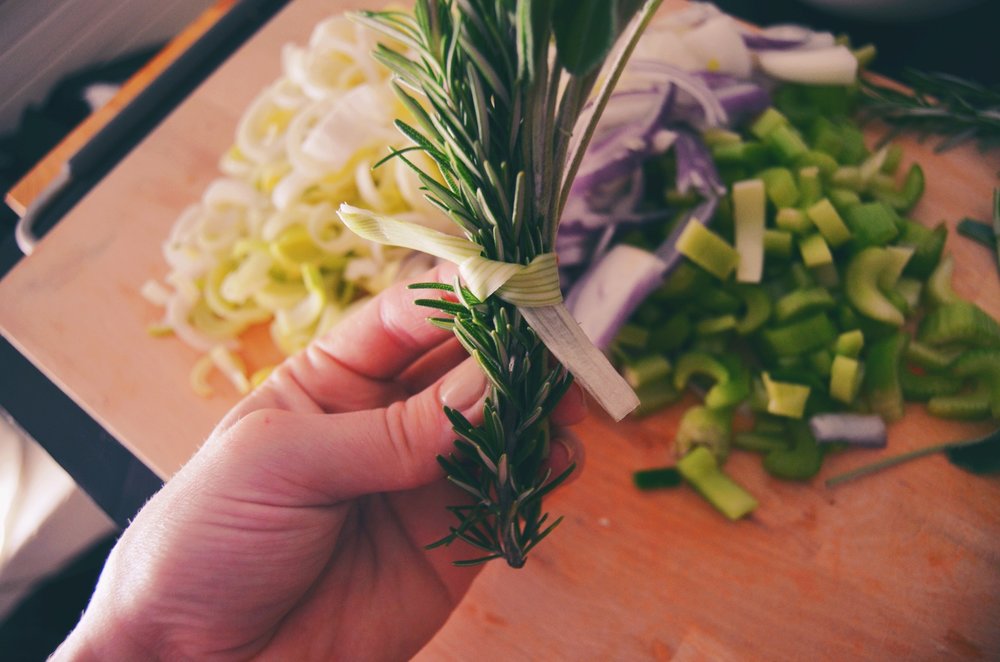 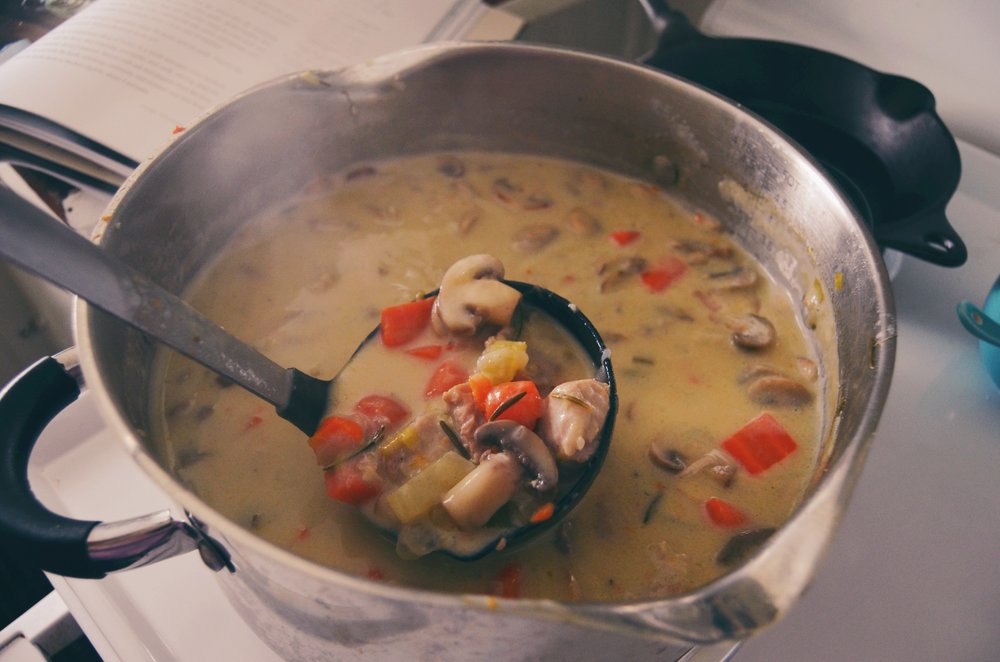 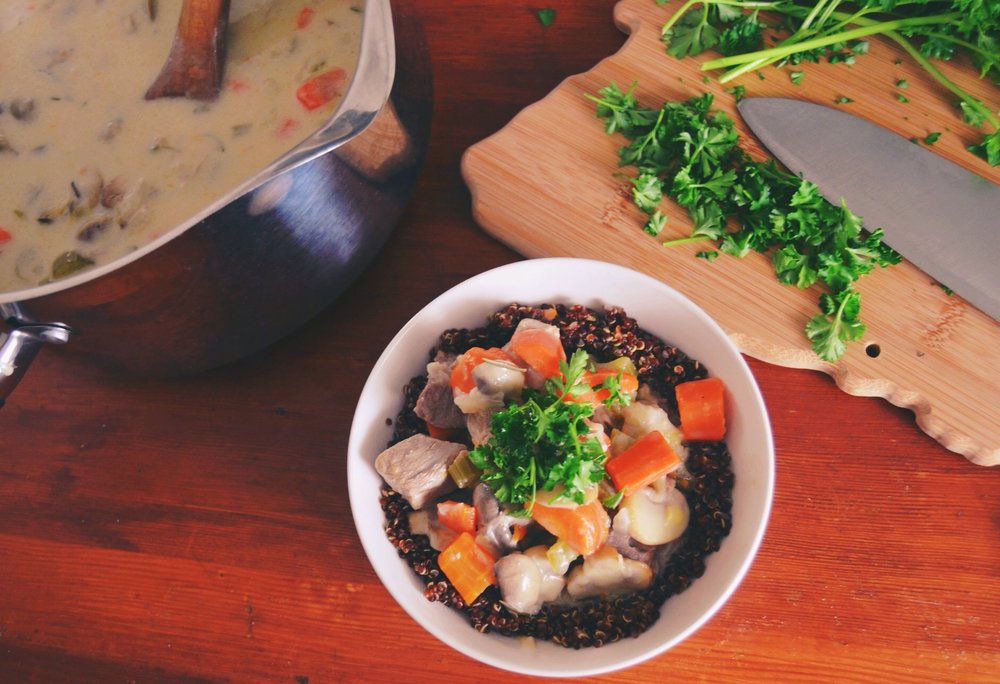 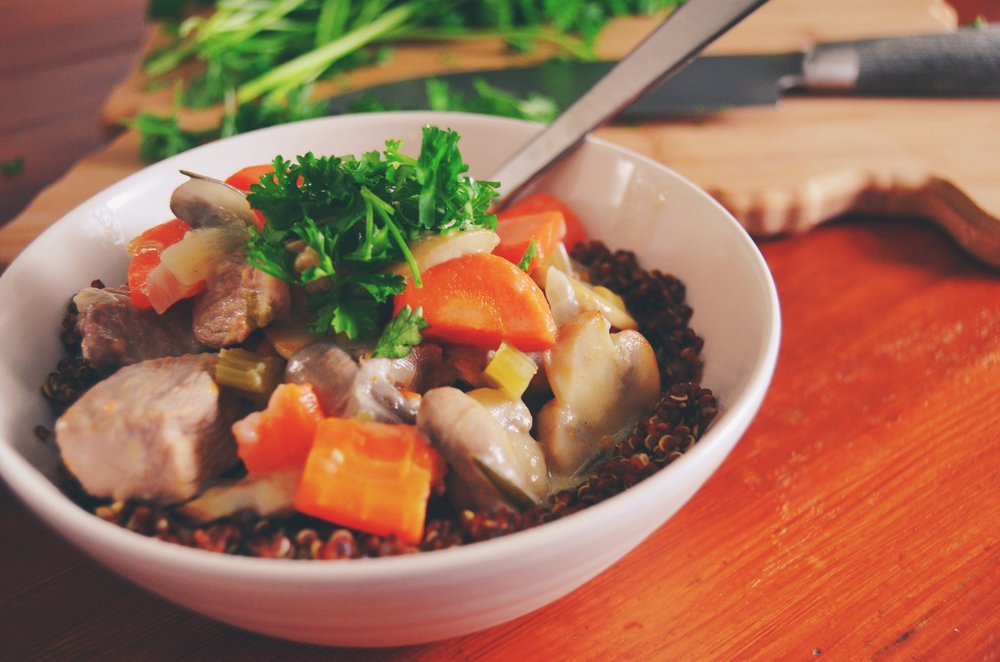 (Mimi used veal instead of pork, she used pearl onions which I omitted since I didn’t have any on hand, and I added a little more garlic, carrots and celery than the recipe called for. You can find her original recipe here!)

What to do
1) Bring a large pot of salted water, enough to generously cover the meat, to a boil. Add the pork, return to a boil, and cook for 1 minute. Skim any scum from the surface.
2) Meanwhile, slice 1 1/2 of the shallots. Stick the cloves into the remaining shallot. Add the carrots, leeks, celery, onion, garlic, all the shallots, and the bouquet garni to the pot, then add the wine, bring to a low boil, and cook for 2 minutes. Season with 1 tablespoon of salt, cover, and simmer over low heat until the pork is tender, about 1 hour and 15 minutes.
3) Strain the meat and vegetables from the broth and set aside. Discard the bouquet garni. Reserve the broth in the pot.
4) Melt 4 tablespoons of butter in a small saucepan over medium heat. Add the flour, whisking constantly, and cook, stirring until the roux thickens, about 2 minutes. Season with salt and pepper. Pour the roux into the pot with the broth, whisking constantly, and simmer over low heat until the broth starts to thicken slightly, about 5 minutes.
5) Return the meat and vegetables to the pot, cover, and simmer for 15 minutes.
6) Meanwhile, heat the remaining 2 tablespoons of butter in a medium sauté pan over medium heat. Cook the mushrooms until golden, about 6 minutes. Drizzle in half of the lemon juice and simmer 30 seconds. Add to the big pot.
7) In a small bowl, mix together the crème fraîche and the remaining lemon juice, then whisk in the egg yolks. Add a ladle or two of the cooking liquid, whisk well, and pour the mixture into the big pot, (Do not boil, or the egg and cream will curdle).
7) Remove from heat and serve immediately, garnished with the parsley.

Note: What is a bouquet garni?
A bouquet garni is a bundle of herbs! It traditionally comprises parsley, a few sprigs of thyme and a bay leaf. These herbs may be bundled into a strip of leek or a piece of celery stalk, or tied in a muslin bag or with string, to keep them together during cooking and allows easy removal.
I didn’t have thyme so I bundled rosemary, sage, and a bay leaf and wrapped it with a strip of leek!