Every single one of us have certain foods that spark nostalgia the second we take a bite. What comes to mind for me would be mint chocolate chip ice-cream, and how every time I take a spoonful I can picture sitting at my nana’s table eating ice-cream for breakfast. Or how anytime I eat fried fish it brings back memories of walking down to the lake with my dad to go fishing and bringing our catch home for a fish fry. And  lettuce wraps of all things will always remind me of my first date with Thomas 🙂

Who would have thought that measly little lettuce wraps at the Cheesecake Factory could become such a monumental meal in our life?!  I’ll never forget our first date, obviously. I guess it was kind of like a second date technically since we had already met on a cruise a few weeks prior. But this was our first date date. We met at the Cheesecake Factory at the Millennial Mall in Orlando and I can still remember what I was wearing! These shiny maroon leggings which sound god awful, which they probably are, but I thought they looked rockin’ at the time!

You could tell that we were both nervous, but a cute-giddy-first-date-kind-of-nervous; you know the kind. The damn Cheesecake Factory menu is so long that I just had to pick something quickly so I went with the lettuce wraps and then Thomas ordered the exact same thing! if you’ve ever had the lettuce wraps at CF then you know they’re massive and one platter could feed an entire tribe. But there we were, with two huge platters of lettuce wraps and only a few bites taken here and there as a result of all the butterflies crowding our stomachs. We spent the rest of the afternoon and evening talking about anything and everything, and the rest is history! I’ve been hooked on Thomas and lettuce wraps ever since 😉

Now we make these bad boys at home all the time! I love doing different variations, but my favorite is Thai inspired with lots of garlic, ginger, peppers, lemongrass and cilantro. I love pairing them with avocado, marinated cucumbers, and a sweeter sauce to drizzle over the top. A healthy delicious meal that can be made in a jiffy. If you’re anything like me you’ll throw on those old maroon leggings while you’re cooking. 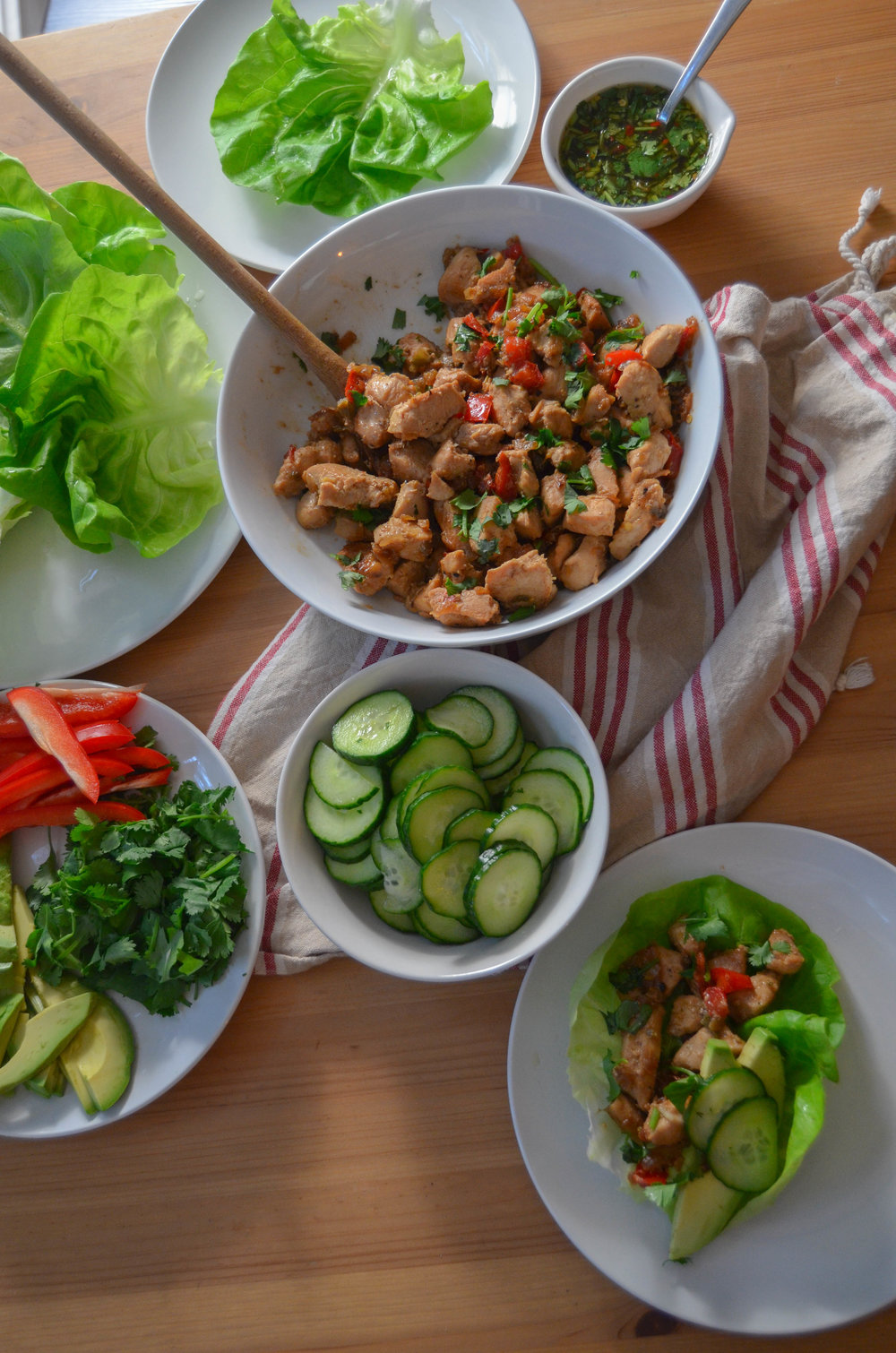 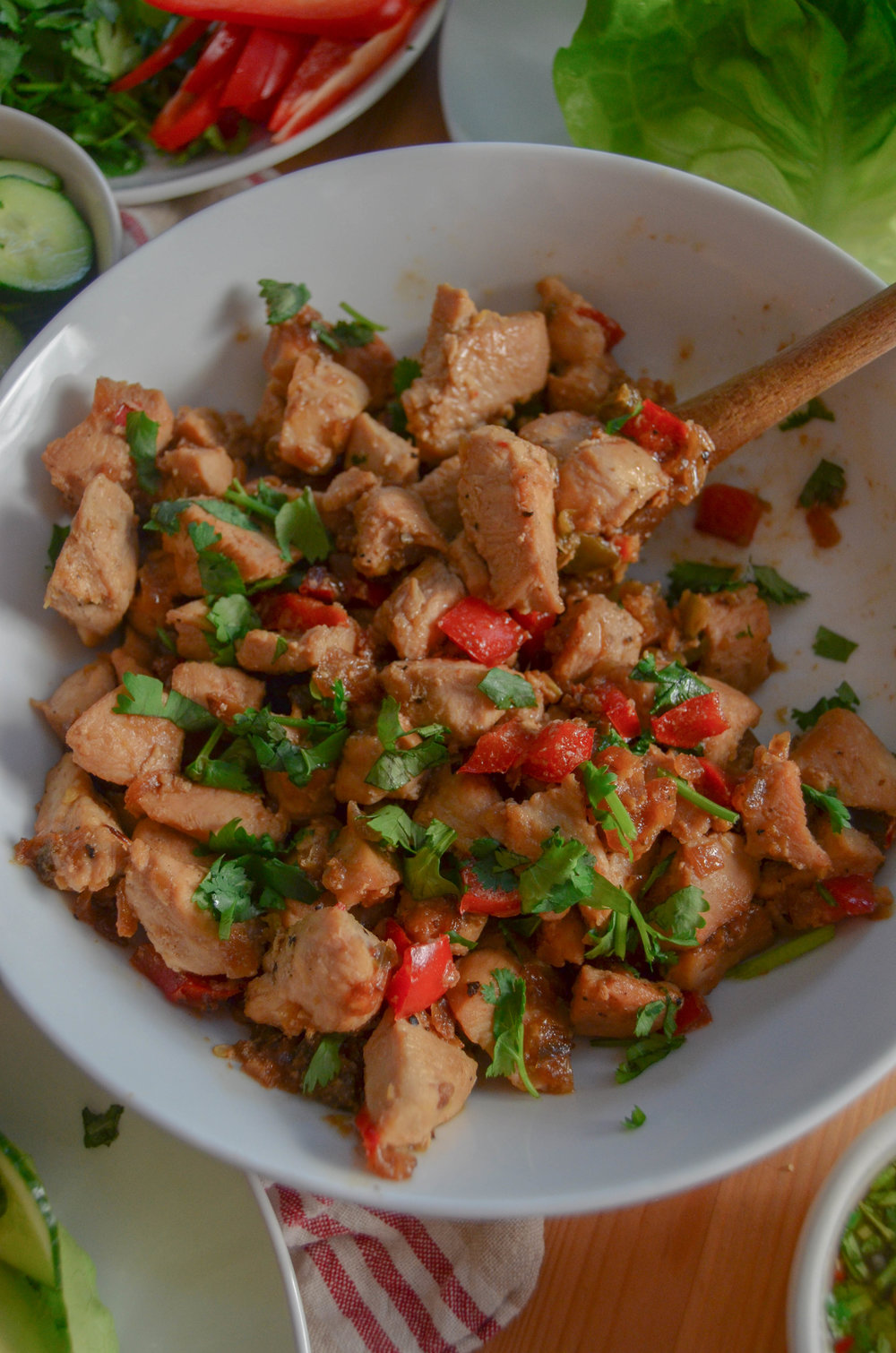 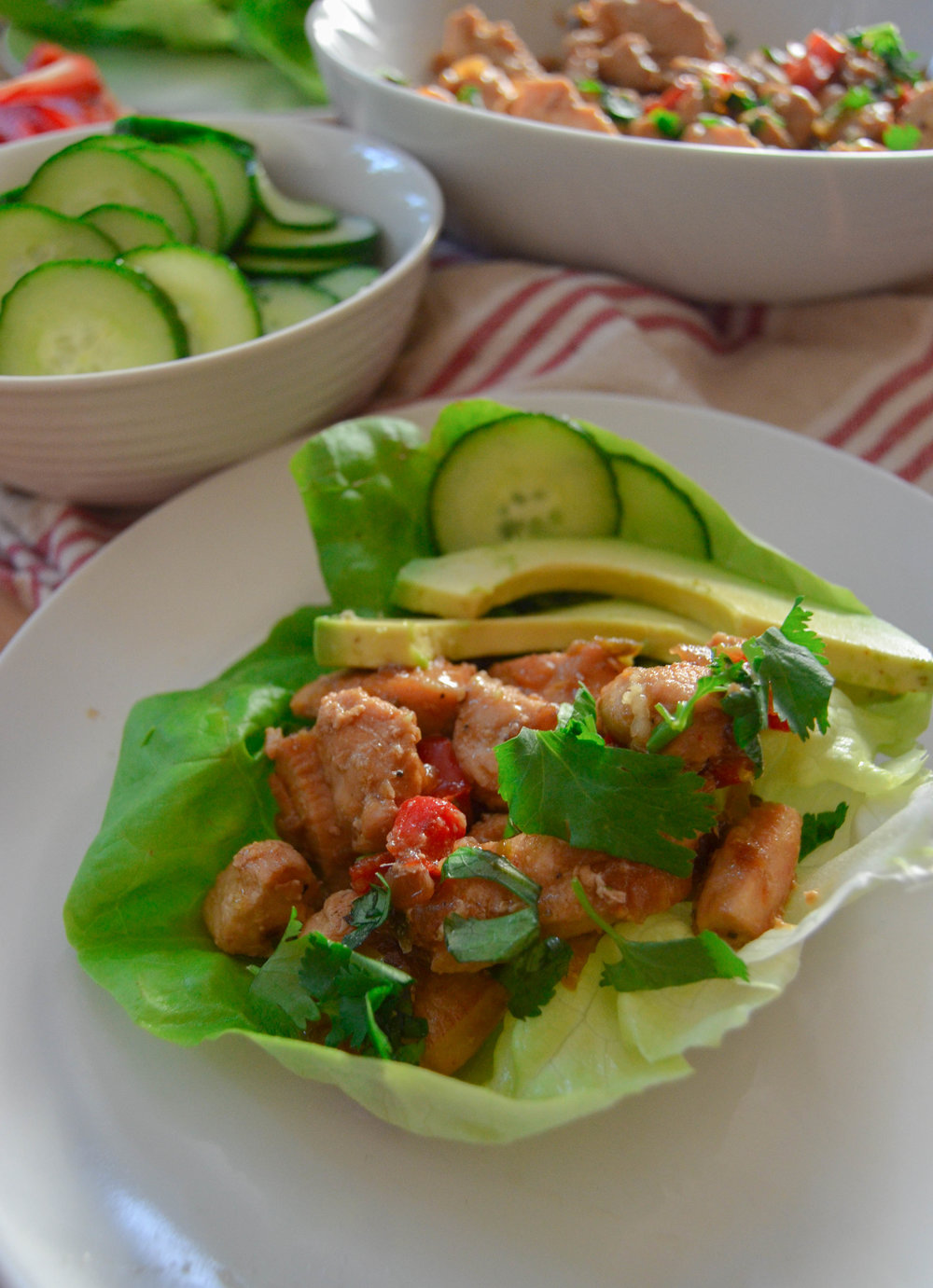 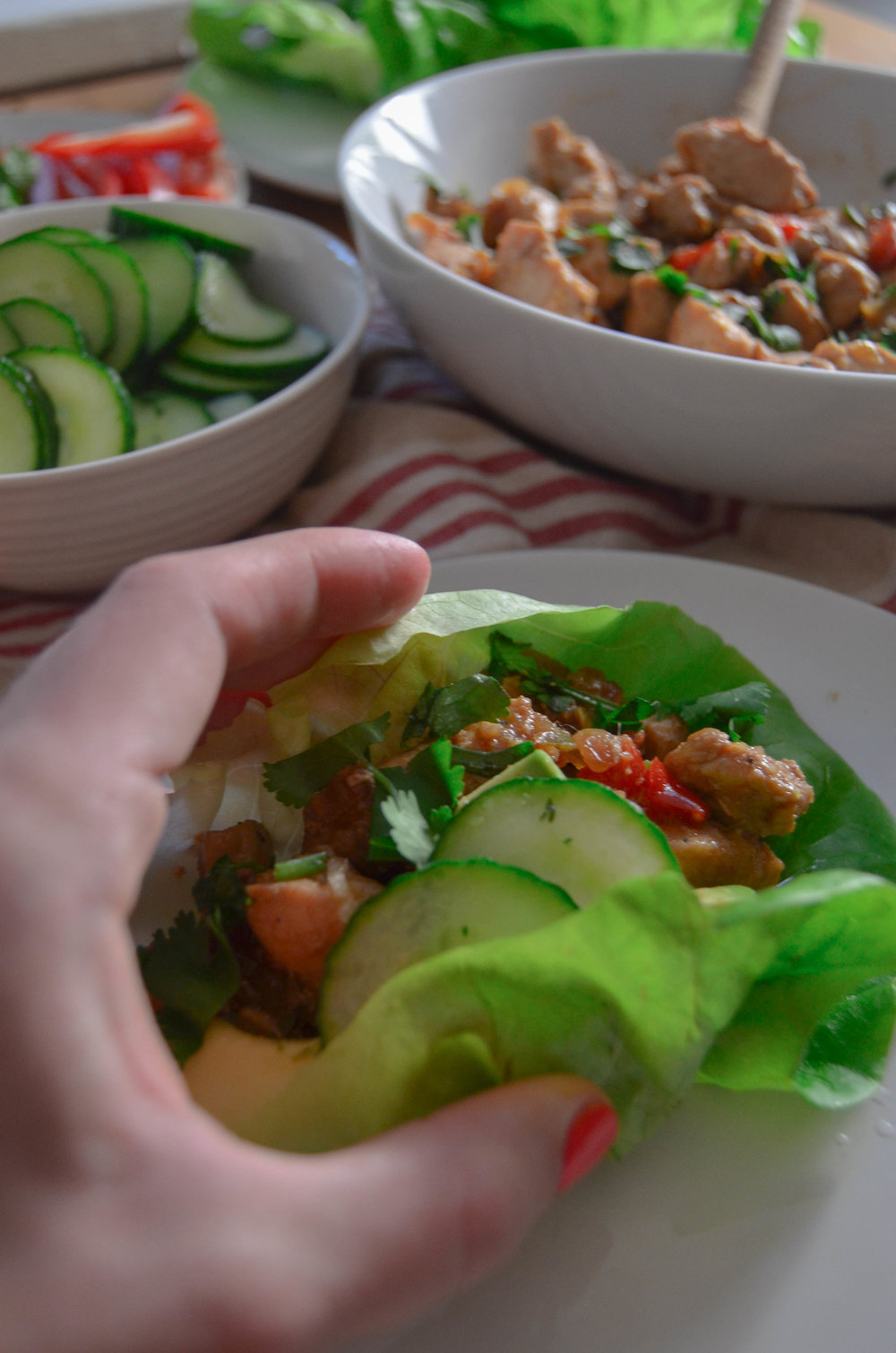 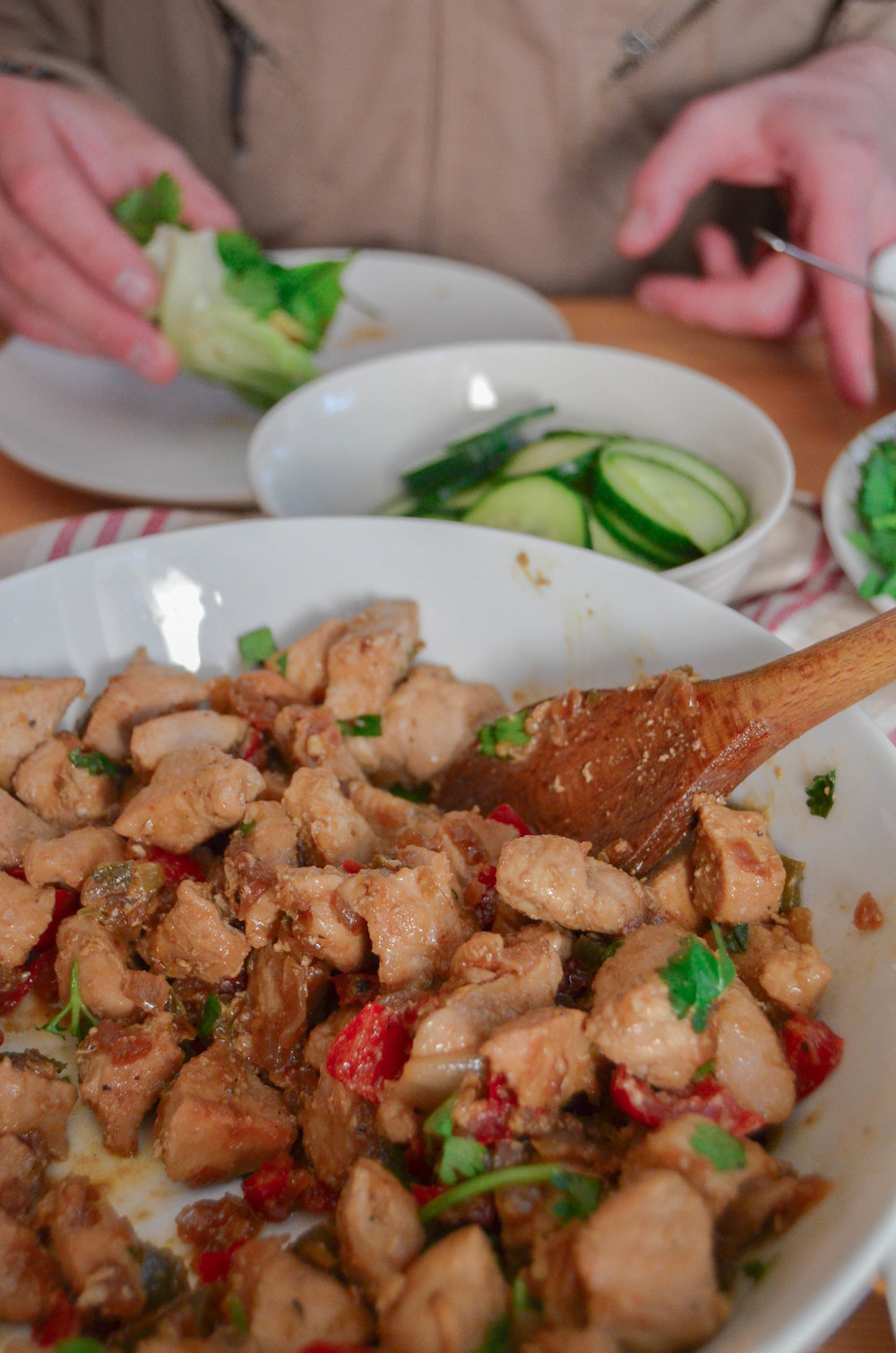 What to do
1) In a large sauté pan, heat the oil over medium heat. Add the onion and red pepper with a pinch of salt and sauté until starting to soften, about 5-10 minutes.
2) While the onions and peppers are cooking, Remove the outer later of the lemon grass stalks. Cut off the lower bulb (the tip) of the stalk. Thinly slice the white parts and either discard the tops of the stalks or reserving for later to use to flavor soup.
3) Once the onion and peppers have started to soften, add the garlic, ginger, lemongrass. Sauté until fragrant, another 2-3 minutes.
4) Remove the mixture to a bowl. Wipe out the pan and then heat a tablespoon of oil over medium-high heat. Add diced chicken and cook until golden brown. Add the honey, soy sauce, hoisin sauce, and rice vinegar and cook until the chicken is done, about 10-15 minutes. Add the onion and pepper mixture back in at the end and stir to incorporate. Serve the chicken mixture alongside a plate of lettuce leaves, marinated cucumber, sliced avocado, chopped cilantro, and any other toppings you desire.

What to do
1) Wash and thinly slice the cucumber. Put the cucumber slices in a large bowl and sprinkle with
1-2 Tbsp salt, Just enough to cover each slice with a bit of salt.  Toss them to evenly coat.
2) Let the cucumbers sit for about 10 minutes until they’ve absorbed a little salt.  Place them in a colander/strainer and rinse off the salt.  Rinse out the large bowl and make the sauce.  Add 3 tablespoons rice vinegar, 1 Tbsp sesame oil and 1 tsp sugar with a pinch of crushed red pepper flakes (or more if you want them spicier!). Whisk together.  Add the cucumber back in the bowl with the sauce. Toss until evenly coated.

Cilantro Dipping Sauce
In a small stainless-steel saucepan, bring 5 tablespoons of rice vinegar, 1 tablespoon of sugar, and 1/4 teaspoon salt to a simmer, stirring. Simmer for 2 minutes. Pour the liquid into a small glass or stainless-steel bowl and let cool. Add 2 cloves of minced garlic, 1 tablespoon chopped cilantro, 1/4 teaspoon red-pepper flakes. I added in another little squeeze of honey, a small pour of soy sauce, and a 1/2 teaspoon of sesame oil to the mixture. Add whatever you want to this! It’s fun to mix it up!