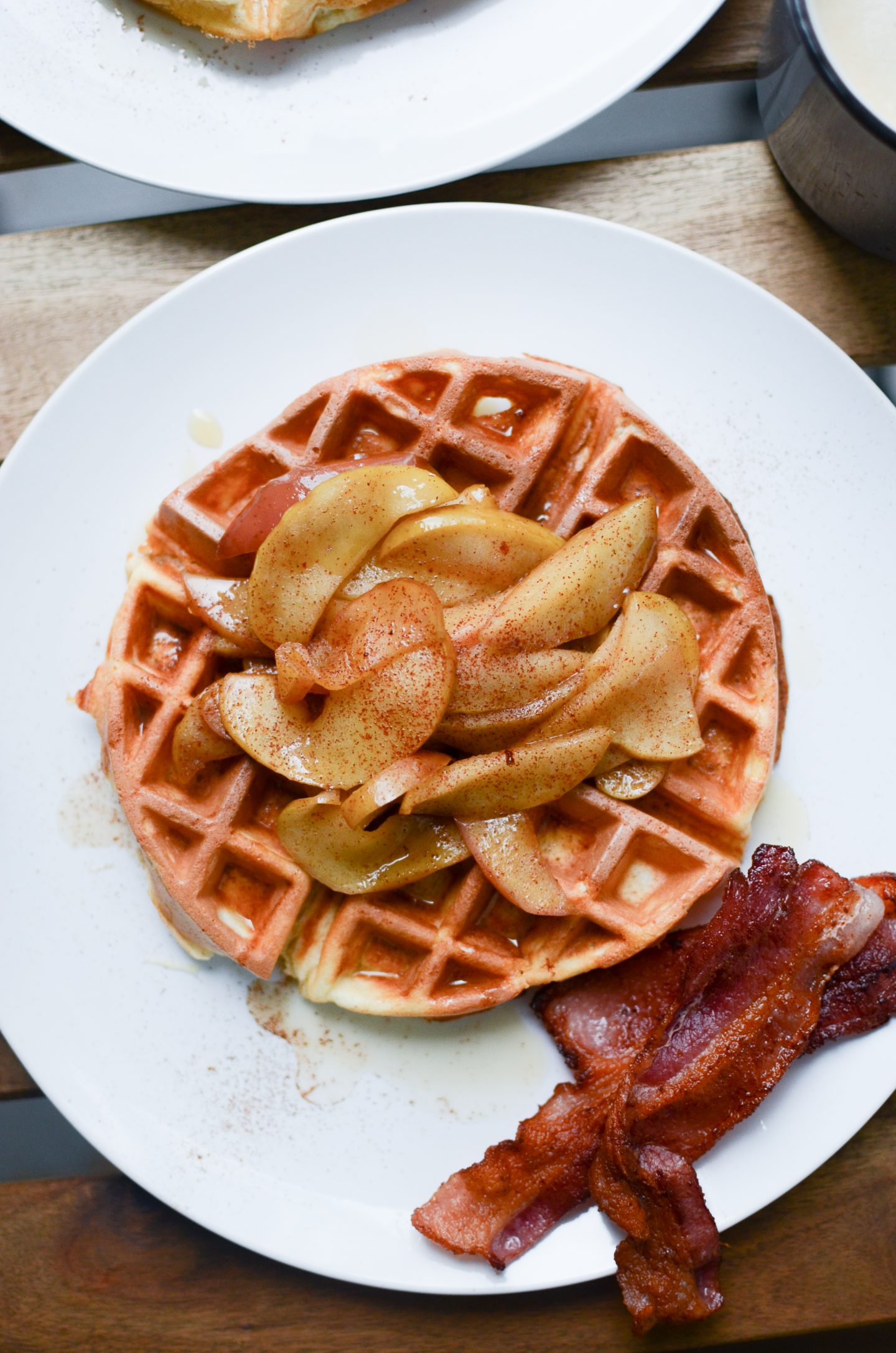 This post may contain affiliate links, which means I may receive a commission if you click a link and purchase something that I have recommended. All opinions and thoughts are my own.

Happy Fall Ya’ll! Well almost… The temps may still be tipping into the 90’s but I’ve got Fall on the brain! 🍁 Belgian mWaffles with cinnamon apples is a simple festive recipe to carry you through fall and into the holidays!

Thankfully the  mornings have started becoming cooler, so we’ve been loving eating our breakfast out on the patio! We got the cutest little bistro table at IKEA which fits perfect in small spaces for those of you doing apartment living. We just moved to Alpharetta a few weeks ago and have enjoyed exploring brunch spots in our new city, but still nothing beats a cozy breakfast at home for us.

I’m normally a savory breakfast person (as you can see I still had to have a side of bacon), but my go-to breakfast on the sweeter side is waffles. Eggo’s were my jam growing up, and although I’ll be thrilled to have the excuse to start keeping them in the freezer again when we have kids, I’ve graduated to the more adult Belgian waffle for now. Our Cuisinart WAF-F20 Double Belgian Waffle Maker makes cooking up waffles a breeze. I love the ability to cook two at a time! 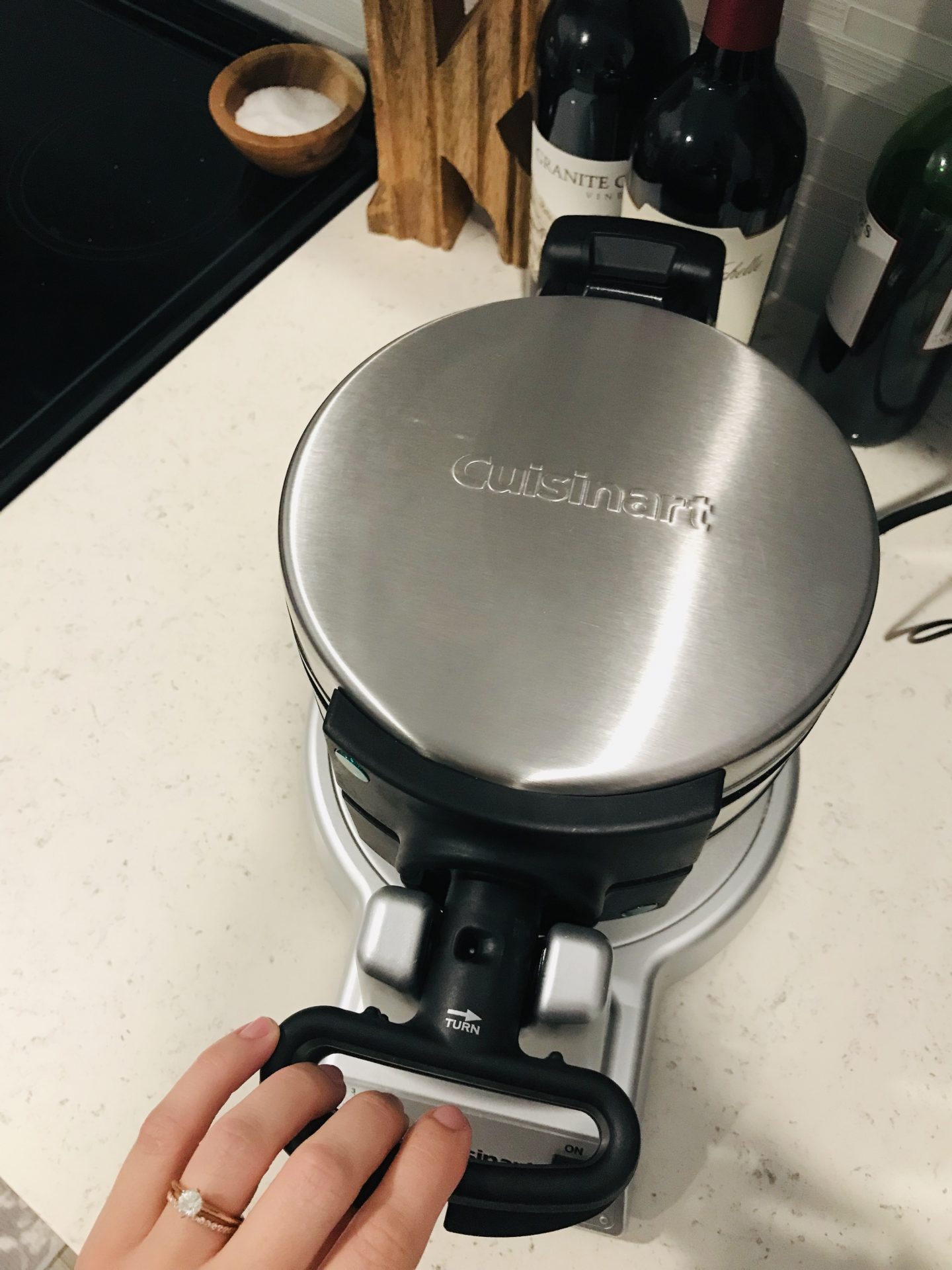 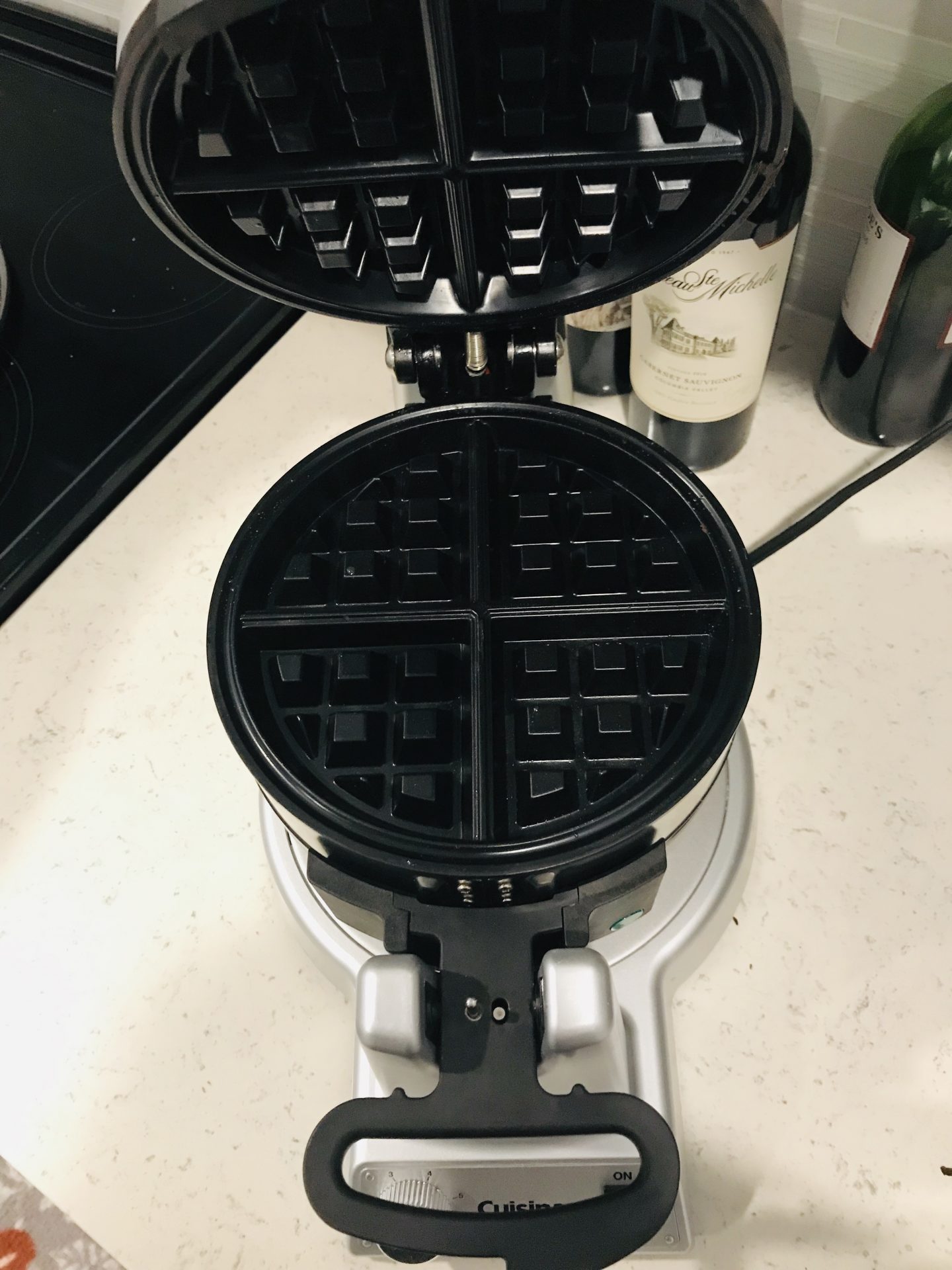 So what makes a Belgian waffle Belgian? Belgian waffles originated at The Brussels World Fair Expo ’58 and were introduced in North America in 1962 at an exposition in Seattle. Belgian waffles are known for their extra-large and deep square pockets that you can fill with butter, jam, or maple syrup, while regular waffles are thinner! Traditional batter can contain yeast to create a fluffy batter, but I substituted baking powder and whipped egg whites to create the same effect! 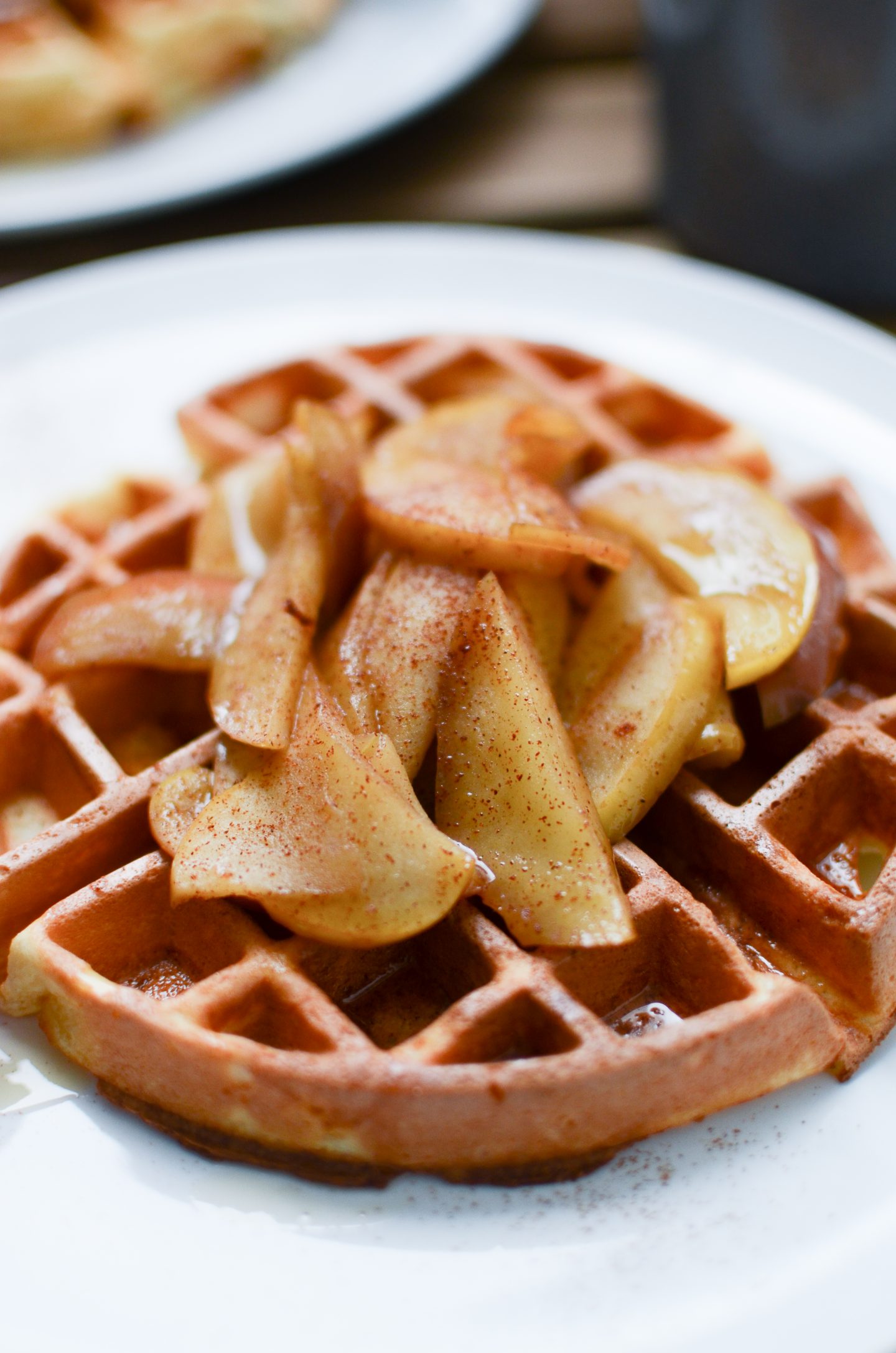 What toppings are good to put on a Belgian waffle?

Spiced cinnamon apples are a perfect fall topping but you can also dress them with: 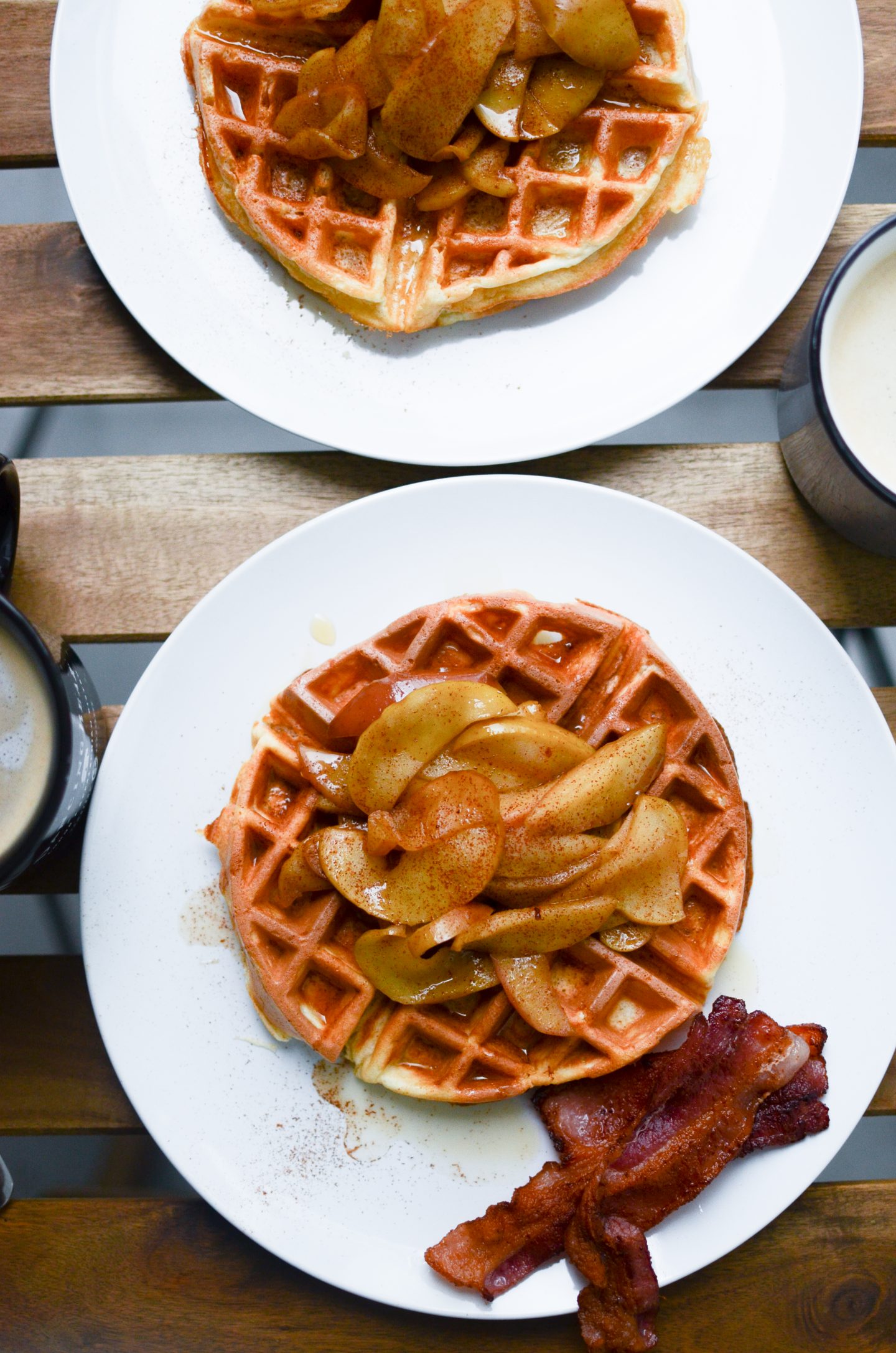