YAY – I can’t believe the news is finally officially out! It’s hard to still even wrap my head around! I’ve been keeping quiet the last few months around these parts because it’s hard to write and share content when all you want to do is talk about being pregnant! With the crazy year that it’s been so many things have happened, but I can truly say that the end of our 2020 has been some of the sweetest days of my life. We moved back to Florida in August, found out we’re pregnant in September, and bought our first home in October, so it’s been eventful to say the least. Thank the heavens I have felt good overall the last 13 weeks, but I have researched things endlessly and I’m constantly looking at other mamas who are going through similar experiences, so I wanted to document my own journey with pregnancy as a resource for any mamas-to-be and something fun for me to look back on in the future! 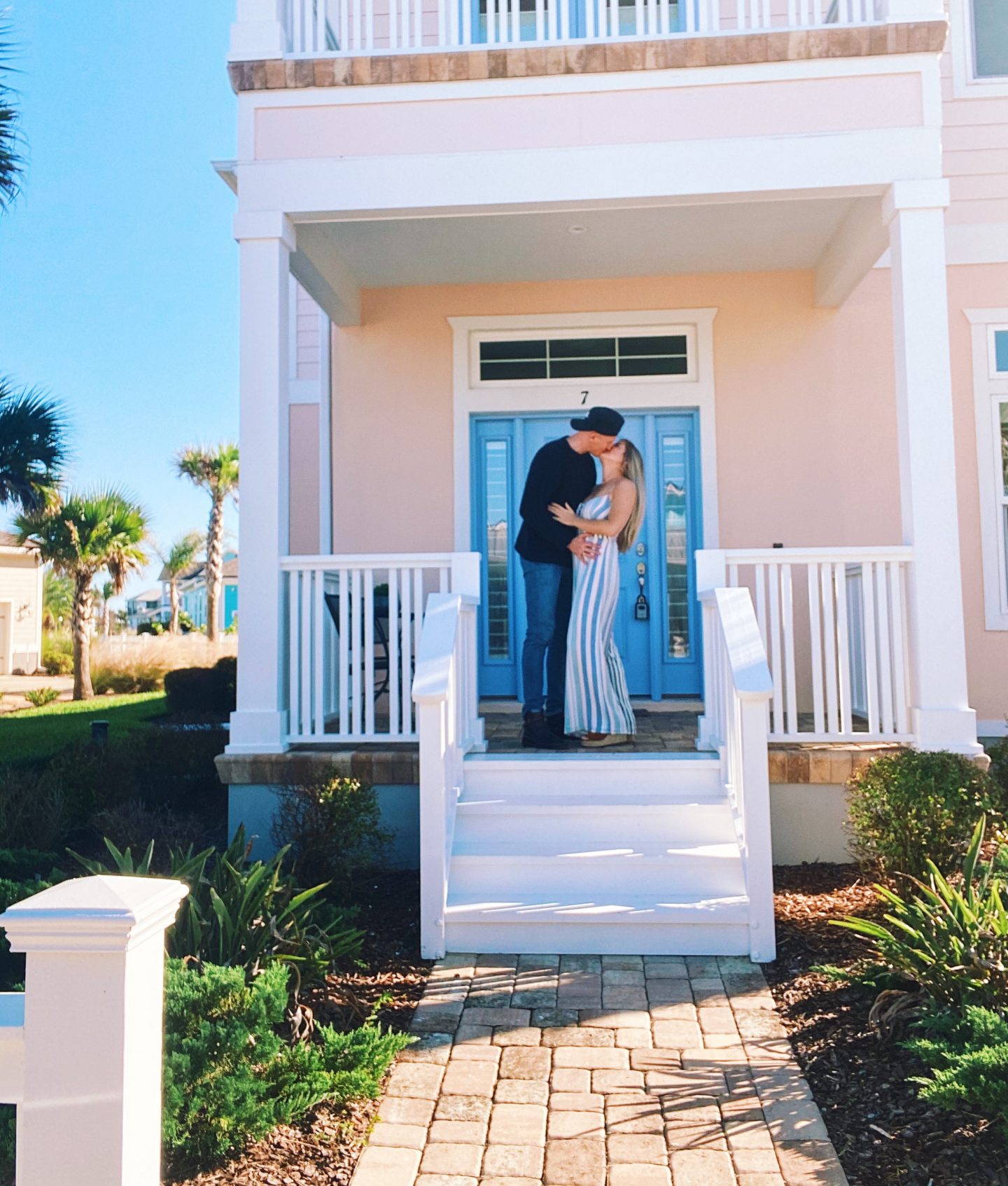 I found out I was pregnant on September 23rd – I was supposed to get my period the next day but hadn’t even missed it yet! I wanted a glass of wine (go figure) but since we were trying I thought I would take a pregnancy test just in case and BINGO! Two little pink lines! Thomas was out golfing and I literally took the test 15 minutes before he got home and I was freaking out, but I kept my cool and surprised him that next morning after I ran out to the “grocery store” and got a cute pair of little sneaks. I also took 3 more tests after the first one just to confirm – I was like Juno chugging Sunny D no joke. Our due date is June 2nd! Can’t wait to have a little beach babe on our hands.

I swear after I found out I was pregnant – the fatigue and morning nausea hit. And while I know I was lucky and didn’t have it as bad as a lot of women, those first 3 weeks or so were the most challenging. It took me a few days to realize how to kick my morning nausea – In the first few weeks the second my eyes popped open in the morning if I didn’t have something in my stomach I would instantly feel nauseous. I never threw up, but it was that terrible sicky feeling that makes you not want to move. 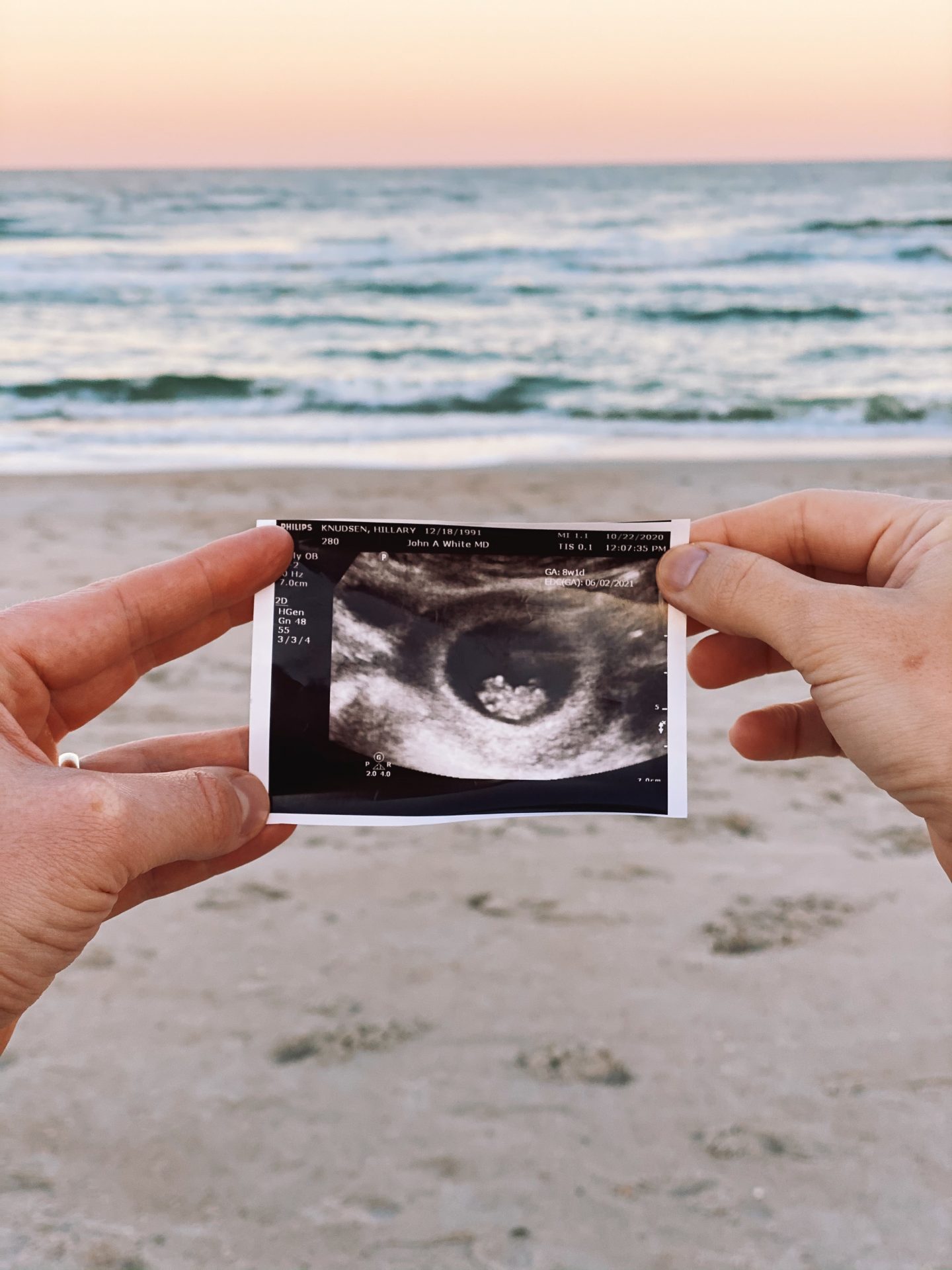 within 10 minutes after waking up I either had a cup of bone broth or a smoothie. Both coated my stomach enough without being too heavy. This organic beef bone broth is the one I like the best and what I drank every morning! I would put a drop of sesame oil and a pinch of salt to flavor it a little.
These natural ginger tummy drops were also a godsend that I’ve ordered multiple times from Amazon to pop periodically.

ALL THE SOUP – I mean outside of the bone broth I have soup probably once a day! It was really the only thing that I have craved and wanted consistently. We make variations of this Bon Appetite chicken soup recipe or things like lentil stew which has a good amount of fiber and protein.

Carbs – but who doesn’t crave carbs right?! I use to limit carbs during the week but now I’m doing a lot of Dave’s Killer bread toast, brown rice and lentil pasta. I have also started making sourdough starter so I see a lot of baked goods in our future.

Week 8 I specifically remember having an absurd craving for Mexican food and chocolate chip cookies lol. I have tried to eat as healthy as possible but you gotta give in a little amiright?!

Mushrooms have been totally unappealing and in the beginning weeks anything creamy grossed me out. That is totally gone now apparently since I literally poured turkey gravy over everything at Thanksgiving… Pre-pregnancy I could get onboard to eat anything, but now I really have to be in the mood to want to eat it.

Week 4-8 the morning sickness and fatigue was the worst. Since week 8 I still get tired if I’m out and about all day and I have always loved a good nap so that hasn’t changed! The most noticeable symptom has been peeing! It’s crazy what rising hormones do to your body and I didn’t realize that hormones are what makes you pee when you’re pregnant! Like clockwork I wake up every night between 2-4 to pee which I never did before. And sorry TMI but we should talk about this… constipation. THE WORST. I know a lot of pregnant women go through this and a lot of time it’s caused by prenatals. Whats helped me is chugging a water first thing in the morning, eating a lot of fiber and putting flax seeds in my oatmeal or smoothie, and pears have surprisingly helped! Sleeping has been good except I’m more aware of when I’m flipping over which usually wakes me up- I’m going to get a pregnancy pillow and see if that helps! What I’ve noticed the most in week 13 is the little bump that is starting to pop – so cute! I can’t wait to see the baby keep growing!

Vitamins + other things I’m adding to my routine

I use Ritual prenatal vitamins. I started taking these about 3 months before we got pregnant and I love them! It’s a subscription service so I don’t have to worry about going out to buy them and they show up in my mail once a month. I love that they list their ingredients and you know exactly what you’re taking and they use high quality Folate and not folic acid. I’ve also added a spoonful of cod liver oil to my diet everyday, sounds gross but it’s actually not! I get this citrus flavored one from Amazon to mask the fishy taste. Thomas said in Norway kids would take this all the time to build their immune systems and it’s the same for pregnant women + it has so many good benefits like Omega-3s DHA.

I signed up for Pure Barre at week 6 – I did it for over a year in Portland and felt like it would be great for pregnancy. I use to run a few days a week but have completely switched to walking – I know you can run but it just makes me a little nervous still and I enjoy walking more anyways! I’m excited to move into our new house in December because it’s on the beach and has the best neighborhood so it will be good to get my steps in!

We have had several doctors appointments and two ultrasounds – We had a friend do a quick one at 5 1/2 weeks just so we could see the heartbeat and then we had an official one at 8 weeks! As you can see from the sonogram pic, the little peanut was just half an inch long! We have done genetic testing bloodwork and a carrier screen at 10 weeks and we will do our anatomy scan ultrasound at 20 weeks.

We decided we aren’t finding out the gender of the baby until they are born! Crazy right?! Everyone says we are nuts but I’m so excited for one of the greatest surprises of our life. We love surprises, so when Thomas said “why don’t we wait to find out” it only took me a few minutes to get onboard. Good thing there’s so many cute companies these days making gender neutral gowns and onesies! Since the baby lives in simple sleeping gowns and footies the first couple of months we will have plenty of time to buy clothes after the baby is born. 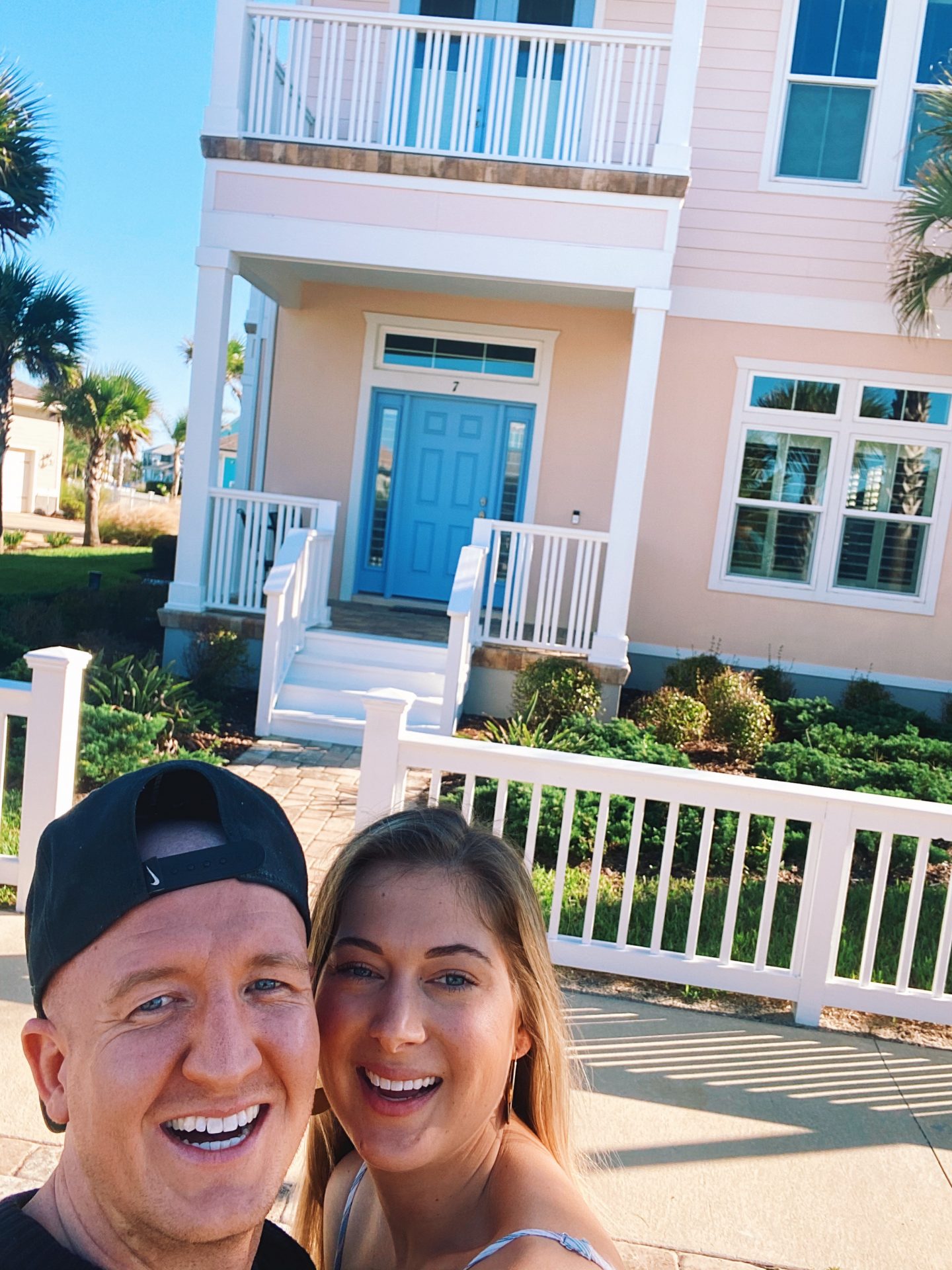 We are beyond excited for this next chapter in our lives. Millions of women give birth every year and bring life into the world but it’s still so damn cool to me and fascinating how incredible the body is. I can’t wait to feel all of his or her little kicks and movements 💕 I can’t wait to keep sharing fun pregnancy content. I have desperately needed a creative outlet lately so I’m excited to document this time in our lives. We move into our house on the 22nd of December so stay tuned for a little beach house tour in the future and some fun recipes I’ve been craving lately while being pregnant!